Peter O’Hagan was renowned for his spontaneous, vibrant paintings in watercolour and gouache. An artist of spontaneity, passion and vibrancy, O’Hagan successfully established himself as an artist of international repute.

Born in Wellington in 1942, O’Hagan attended the University of Auckland and graduated with a degree in Architecture in 1977. Whilst practicing as an architect in the Bay of Islands, O’Hagan received tuition from notable New Zealand artists Patrick Hanly & Agnes Wood. It was Hanly who encouraged O’Hagan to relinquish his career as an architect in order to pursue his artistic career. Encouraged by Hanly, O’Hagan had his first solo exhibition aboard the liner QE2, which gave him the confidence to continue with his chosen vocation and helped to establish his international reputation.

In 1992 O’Hagan held an exhibition of his Tahitian watercolours at the Gallerie Artiste on the Boulevard Saint-Germain in Paris. It was widely acclaimed in the French press and within two weeks the show was a sell out.

Having spent a prolonged period of time painting abroad during the 1980s, O’Hagan settled in Australia, drawing on his travels as inspiration for his works. As well, his early career as an architect and curator for the New Zealand Historic Places Trust, combined with his taste for the ‘finer things’ in life, are elements that influence his painting.   In 1998, in recognition of his artistic talent, O’Hagan was appointed Artist in Residence at the prestigious Champagne House Veuve Clicquot Ponsardin. His base was the Widow Clicquot’s historic Manoir de Verzynear Reims, France.

In 2002 O’Hagan tragically lost his home and studio in the Canberra bush fires. This devastating loss was the catalyst for a period of extensive travel through Europe and in 2005 he completed a series of paintings based on his time abroad, particularly in the vineyards of France. The paintings also depicted another of his enduring passions; fine Australian and New Zealand wines. Late in 2005, O’Hagan completed a commissioned painting in a new style that celebrated Veuve Clicquot’s modernity.

O’Hagan lived and work in Australia, but continued to travel and paint watercolours and gouache in a fresh calligraphic style. He exhibited at ‘home’ in Auckland and at other leading galleries in London, Paris, Melbourne and Sydney. His work has been purchased for leading corporate collections such as Air New Zealand, Hyatt Hotels, the Hotel de Crillon (Paris), Venice Simplon Orient Express, The Government of Macau and of course, Veuve Clicquot Ponsardin. 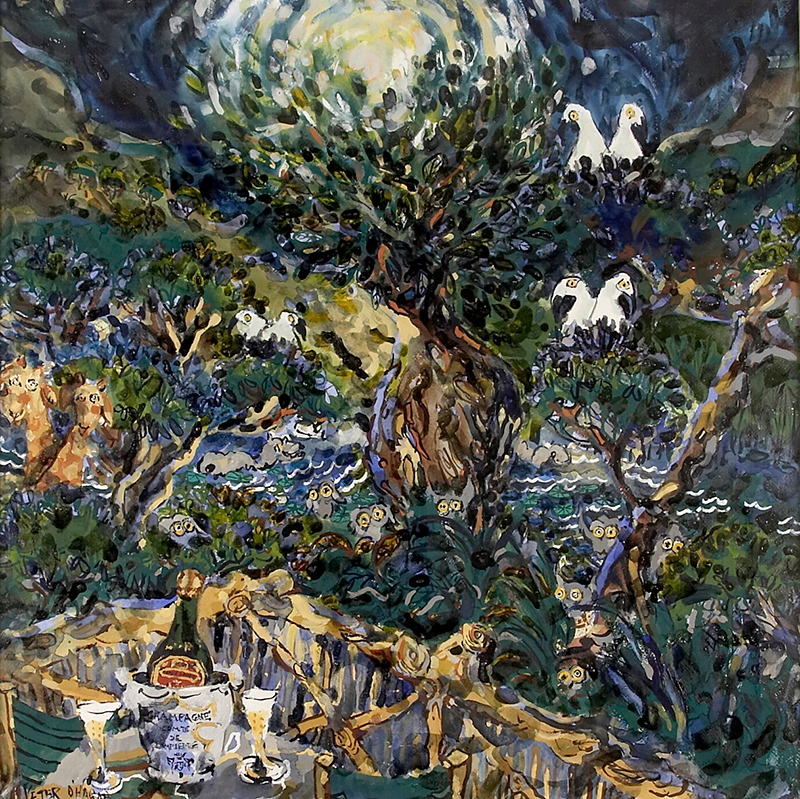