Charles Frederick Goldie was born in Auckland, New Zealand, on 20 October 1870. The second of eight children born to David Goldie and his wife, Maria Partington, he was second-generation colonial on both sides. His father was born in Hobart and by 1870 was a timber merchant in Auckland. A career in local and national politics lay ahead, including the Auckland mayoralty. Maria Partington was born in Auckland. The boy was named after his maternal grandfather, Charles Frederick Partington, builder of the landmark Auckland windmill.

Goldie entered Auckland College and Grammar School in 1883. He displayed an early promise in art and was soon winning prizes at the Auckland Society of Arts and the New Zealand Art Students’ Association. On leaving school he worked in his father’s business while continuing part-time art studies under Louis John Steele. Steele had trained at the École Nationale supérieure des Beaux-Arts in Paris and his colourful tales of bohemian life inspired Goldie to seek further education in Paris. Sir George Grey was impressed by Goldie’s two still-life paintings exhibited at the Auckland Academy of Art (Steele’s art society, of which Goldie was honorary secretary) in 1891, and he convinced David Goldie to allow his son to undertake further art training abroad. In November 1892 Charles travelled to Sydney where he exhibited the same still lifes. Back in New Zealand, the Academy’s third and final exhibition of December 1892 included his first recorded Māori portrait.

In July 1893, at the age of 22, C. F. Goldie enrolled at the cosmopolitan Académie Julian in Paris. For 41⁄2 years, until January 1898, he studied in the studio supervised by the eminent Salon painter William-Adolphe Bouguereau. Goldie won regular prizes in the studio competitions and in 1896 was awarded a gold medal for life painting in a school-wide competition. He also undertook the customary copying of old masters in the Louvre and other galleries, and visited Great Britain, Belgium, Holland, Germany and Italy. Although a number of other New Zealand artists studied art in Paris, few stayed for more than a year or two. Charles Goldie was the only one of his generation to undertake the full rigours of French academic training.

In an 1897 letter from Paris, Goldie expressed his intention of returning to set up an art school along the lines of the Académie Julian. In 1898, he was back in Auckland, sharing a studio with Steele, his former teacher. The studio also hosted the teaching institution they called the ‘French Academy of Art’. That year Goldie and Steele collaborated on a large historical painting, The arrival of the Maoris in New Zealand, loosely based on Théodore Géricault’s famous Raft of the Medusa in the Louvre. When it was exhibited with the Auckland Society of Arts in November 1899, the work was priced at £200.

This was the exact amount of the Helen Boyd bequest, by which the painting entered the collection of the Auckland Art Gallery. It was at this stage that, apparently infuriated by the critical attention accorded to his star pupil, Steele ended his professional association with Goldie.

Goldie’s career began in earnest in 1900, the year in which he first presented a range of portraits – Pakeha and Māori – at the Auckland Society of Arts. He was appointed to the Auckland Art Gallery advisory board established in 1900, and served on the committee of the Auckland Society of Arts from 1901 to 1904. These were the years in which Goldie chose to concentrate on depicting elderly Māori with moko, the “noble relics of a noble race”. Immaculately rendered on canvases, which he prepared with a textured ground, the paintings were presented in distinctive kauri frames produced exclusively for Goldie by Auckland framer and art dealer John Leech. Photographs of early twentieth century exhibitions show how these emphatic frames guaranteed central positions for Goldie’s works.

It was through James Cowan that Goldie met Patara Te Tuhi in 1901, and the Ngati Mahuta chief became a regular model. The following year Goldie painted his first portraits of Ina Te Papatahi of Nga Puhi, and Te Aho-o-te-rangi Wharepu of Ngati Mahuta, both of whom continued to pose for him over a number of years. A trip to Rotorua in 1901 introduced a number of Te Arawa models, including Ahinata Te Rangitautini of Tuhourangi. Goldie’s models usually sat for him in his Auckland studio, draped in a cloak supplied by the artist, or a combination of blanket and velvet. In return they received a daily stipend, which was open to negotiation, on top of which Goldie sometimes covered accommodation costs for a model from out of town.

Goldie’s greatest publicity coup was in 1903 when Lady Ranfurly, departing wife of the Governor, chose two large Goldie paintings as her farewell present from Auckland. Darby and Joan and The widow, valued at £100 each, were purchased by popular subscription and presented to Lady Ranfurly at an enormous garden party. Goldie’s fame was reinforced by frequent reproduction of his paintings in the illustrated press, and as chromolithographic prints, which have since become collectors’ items in their own right. Asked in 1908 to name the best six New Zealand artists, readers of the Weekly Graphic placed Goldie first; Gottfried Lindauer came eighth, while Steele was in 11th place.

Goldie’s notoriety may have been secure, but the critics grew increasingly tired of his minutely realistic portraits. A writer in 1911 aptly described Goldie’s style as “photo-realist”, commenting that “his artistic ideal seems to be the coloured photograph.” Others suggested the works were more suited to a museum of ethnology than an art gallery. Despite the critical hostility, Goldie continued to exhibit new groups of works every year until 1919. During the First World War he stopped producing large pictures, for which he had asked prices of up to £105, concentrating instead on small-scale paintings usually executed on wooden panels. These were priced between eight and eighteen guineas and, unlike the brush-textured canvases, were utterly smooth. Increasingly, Goldie was producing replicas of earlier paintings, of models that had long since died.

On 31 October 1920 Goldie travelled to Sydney, where on 18 November at the age of 50 he married 35-year-old Olive Ethelwyn Cooper, an Australian by birth but a resident of Auckland. After two years in Sydney, where Goldie produced copies of several Māori portraits, he was back in Auckland by January 1923. Ill -health plagued him throughout the 1920s and early 1930s, when he produced few paintings. Gossip held him to be an alcoholic; symptoms such as memory loss and delusion suggest that lead poisoning, the result of inhalation as he sanded the deadly flake white undercoats on his paintings, may have played a part in his health problems.

Encouraged by the Governor General Lord Bledisloe, Goldie resumed painting around 1930, creating a distinctive body of work marked by a warmer palette and looser brush. He re-presented models he had first depicted decades earlier, providing these ‘portraits’ with tendentious titles such as His thought: ‘The Treaty of Waitangi, was it worth while?‘ Ignoring the Auckland Society of Arts, Goldie sent work to London for exhibition with the Royal Academy of Arts (in 1934 and 1935), and to Paris for the Salon of the Société des Artistes Français (in 1935, 1936, 1938 and 1939). His successes, duly reported in the local press, included the award of King George V’s Silver Jubilee Medal and an OBE in 1935. Sales, many to wealthy tourists, considerably eased the economic depression of the 1930s both for Goldie and for his dealer, John Leech. His health deteriorating, Goldie stopped painting altogether in 1941. He died in Auckland on 11 July 1947.

Because John Leech’s sales records were destroyed, the true extent of Goldie’s oeuvreis unknown. Although hundreds of his works are preserved in private collections, many of Goldie’s more important paintings are owned by New Zealand museums. The artist himself maintained a large collection of his early work, motivated by the realisation that his elderly models were fast disappearing. His widow presented twenty Māori portraits from this collection to the Auckland Museum in 1951. The collection of nineteen paintings in the Auckland City Art Gallery includes gifts from Goldie’s patrons and their descendants, as well as from the artist and his family. The two ‘Ranfurly’ pictures of 1903 are now in the collection of the Museum of New Zealand Te Papa Tongarewa in Wellington.

Goldie is probably New Zealand’s best-known artist. His popularity is based largely on a spiral of record-shattering prices, together with thefts, vandalisms and forgeries, which have ensured that Goldie’s paintings are identified as prime commodities on the art market. Descendants of Goldie’s models have hailed the depictions of their ancestors; others have denounced the paintings as racist. On his appointment as OBE in 1935, a writer predicted of Goldie’s works: “connoisseurs will fight for them in Christie’s and elsewhere, perhaps when none of the race he perpetuates deathlessly are here”. 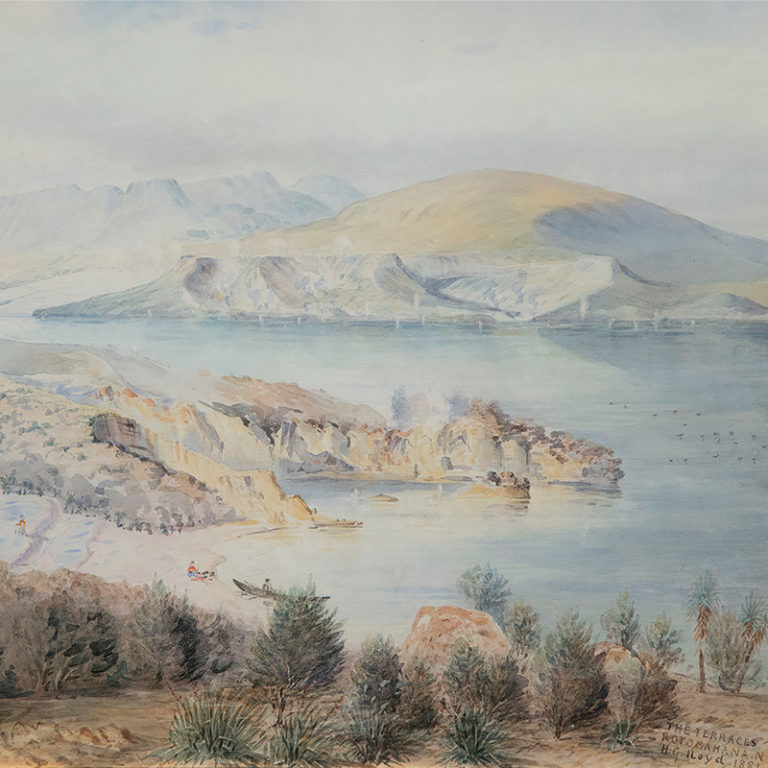 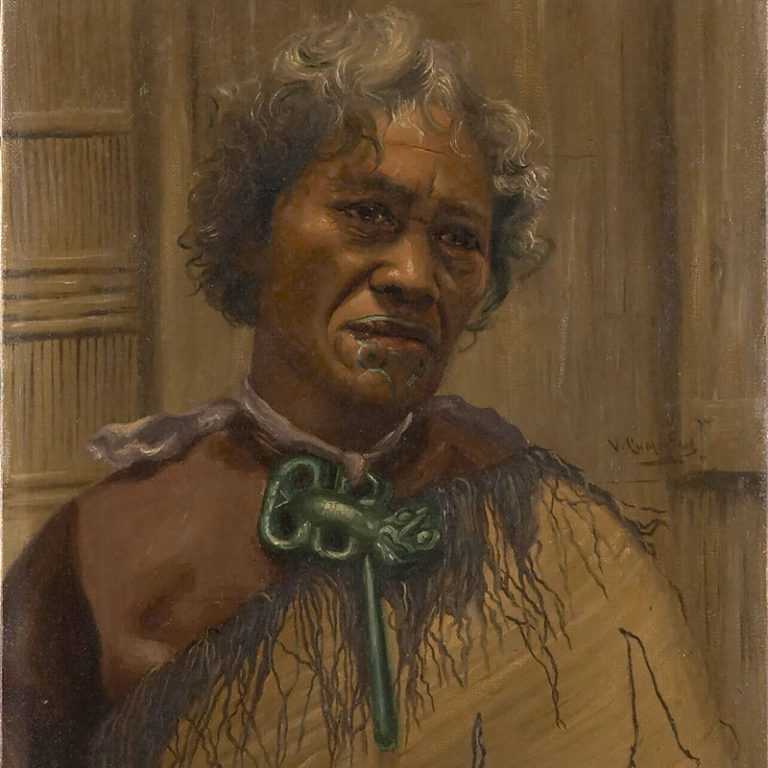