Mervyn Williams has established a distinguished career as a painter and printmaker but his practice has sometimes involved sculpture, as his reliefs made in Whanganui from recycled timber demonstrate. Also, his interest in virtual and real textures in his two dimensional works encroaches upon sculptural concerns with depth as well as surface. But, his recent move into free-standing sculpture is a radical one which is unusual in New Zealand where painters and sculptors of his generation normally remain in separate camps. However, he is driven by his own inspiration as an artist and has the versatility to move where it takes him, as was the case with major masters like Picasso and Matisse. It also brings him into line with contemporary artists who often work across various media as need requires. Since 2016 sculpture has been the main focus of his art and painting has receded to a secondary position. A remarkable thing about Mervyn Williams’s sculptures, apart from their quality, is that he created them largely after he turned seventy-ﬁve. It is unusual for an artist to be innovative at that age, and the more so in that a painter should turn to sculpture with such application and success. But Williams is no ordinary artist as his intensity and creativity demonstrate in these new sculptures. He is concerned with quality not quantity and has no desire to repeat himself as some older artists do. When he saw the potential for a new and distinctive development he took it, despite the risks. At ﬁrst the sculptures, which had their beginnings in 2011, were tangential to his paintings but gradually they took over his practice. He was aware that he had discovered something new, unlike any other sculpture in New Zealand, or indeed anywhere else that he could ﬁnd. 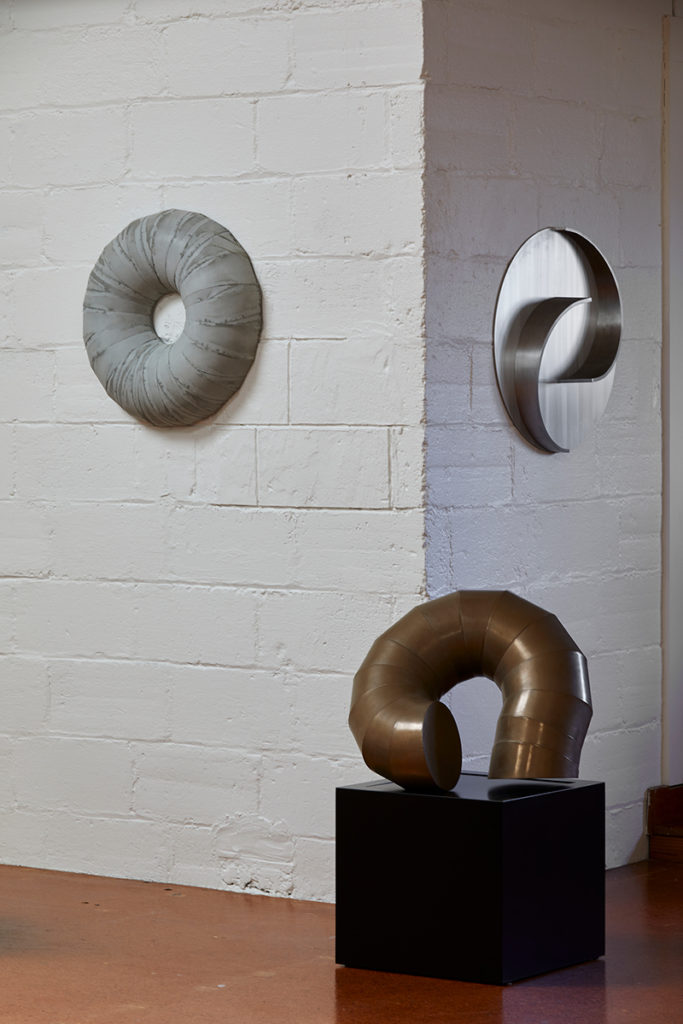 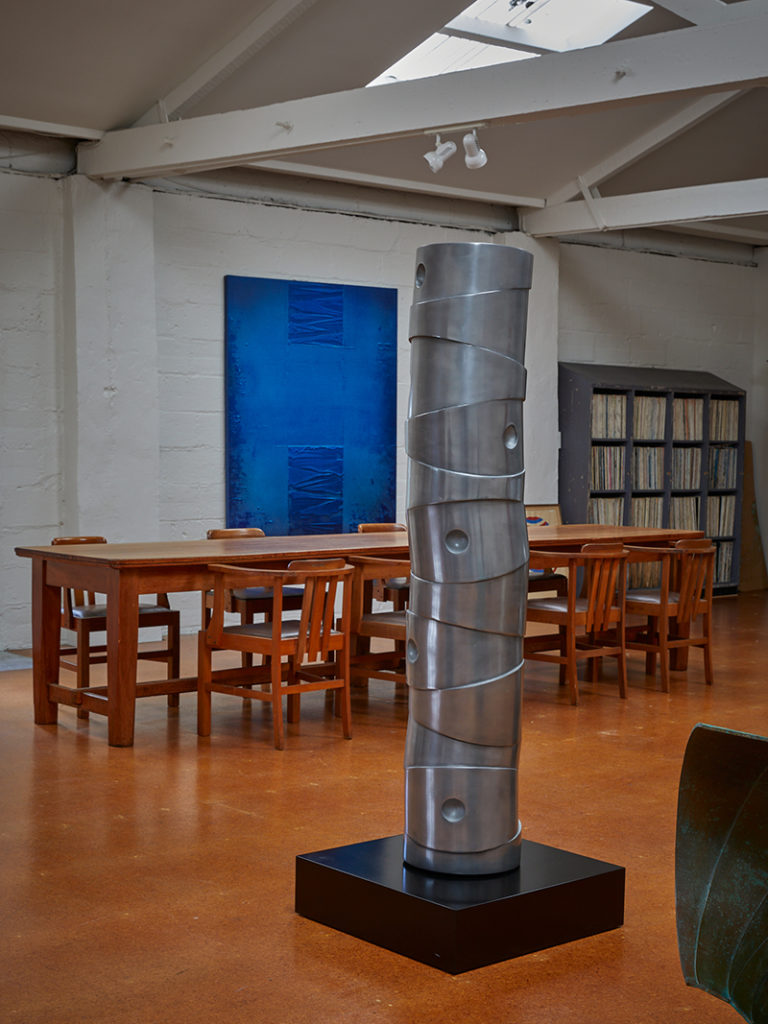 His sculpture is conceptual not representational in type. Its origins can be traced in European modernist abstraction going back to Brancusi and Hans Arp. The works are constructed, not modelled, and are assembled out of component parts that are fabricated into the ﬁnal form by the artist. Unlike his wooden assemblages of the 1980s in Whanganui, these new sculptures relate more to the man-made objects of the commercial world than to nature. He uses discarded cores involved in the casting of pipes and related forms to build the sculptures. These are sawn into sections by his assistant and assembled by Williams into the tower-like and centralised structures of his work. There is an almost modular aspect to the works creating a play on related units that nevertheless are varied and never repeat one another exactly. Williams is acutely aware of the surfaces, of the value of a ridge, a shadow, a cavity or projection. They encourage close viewing and touch. Their curving surfaces require the works to be walked around to experience the full richness of the forms in space. In most cases Williams mounts the sculptures on a plinth that lifts them above the ground and separates them from their surroundings. This encourages us to see them as distinct entities and to engage with them as art works with their own self-contained beauty.

Williams’s sculptures stand apart from local practice to a large extent, though the nearest point of contact would be with some work made by Marte Szirmay, fabricated from aluminium. The works have no connection with indigenous art in New Zealand or the Paciﬁc.

They do not quote, reference or parody anything out there in contemporary world as happens with Pop Art. They seem almost detached, timeless, and self-sufﬁcient. Like his paintings they appear international in conception. Anything trivial, anecdotal or narrative has been erased or deleted. At present the sculptures are of a domestic scale and can ﬁt into the spaces of an average house or courtyard area. Not all of them are fabricated out of materials that would withstand the ravages of constant outdoor exposure, although Williams likes the idea of time and weather giving a patina of age and character to the outdoor works.

He sees the potential of the sculptures to be much bigger, even monumental, and able to be placed in a park-like environment or in front of public buildings such as an art gallery. The constraints of expense make that development seem unlikely without a sponsor or patron.

Of the sculptures, the majority are free standing but there are several wall mounted reliefs, such as Elemental, 2017, and Seraphim, 2018. They project from the wall and have textural and volumetric interest. In Elemental the central area of the circular form is open revealing the wall and integrating it into the piece. The freestanding ‘tower’ forms have the strong vertical interest as well as the modular structure that generates movement. There is elegance and subtlety in these works that appear somewhat open ended, as if one could add sections to them and make them taller still. It recalls the idea behind Brancusi’s Endless Column that envisaged this development. By contrast, the inward curving works, like Acrobat, 2017, are gravity bound and rest ﬁrmly on the plinth.

Compared with the ‘tower’ works there is a contrast of directional movement and a comparative sense of completion and resolution. In all the sculptures there is surface and textural interest as well as directional and spatial movement. Although the sculptures are distinct from his recent paintings, they have some afﬁnities. Both sculpture and paintings are non-ﬁgurative and self-contained. In both there is a high degree of technical accomplishment and a feeling of total assurance in the realisation of the works. Idea and execution are perfectly matched. Circular forms can be found in paintings and sculpture as well as comparable subtleties of texture, real and virtual. Seen together, they seem to complement and enhance one another. They are a remarkable achievement and show that Mervyn Williams at eighty is at the height of his creative powers. 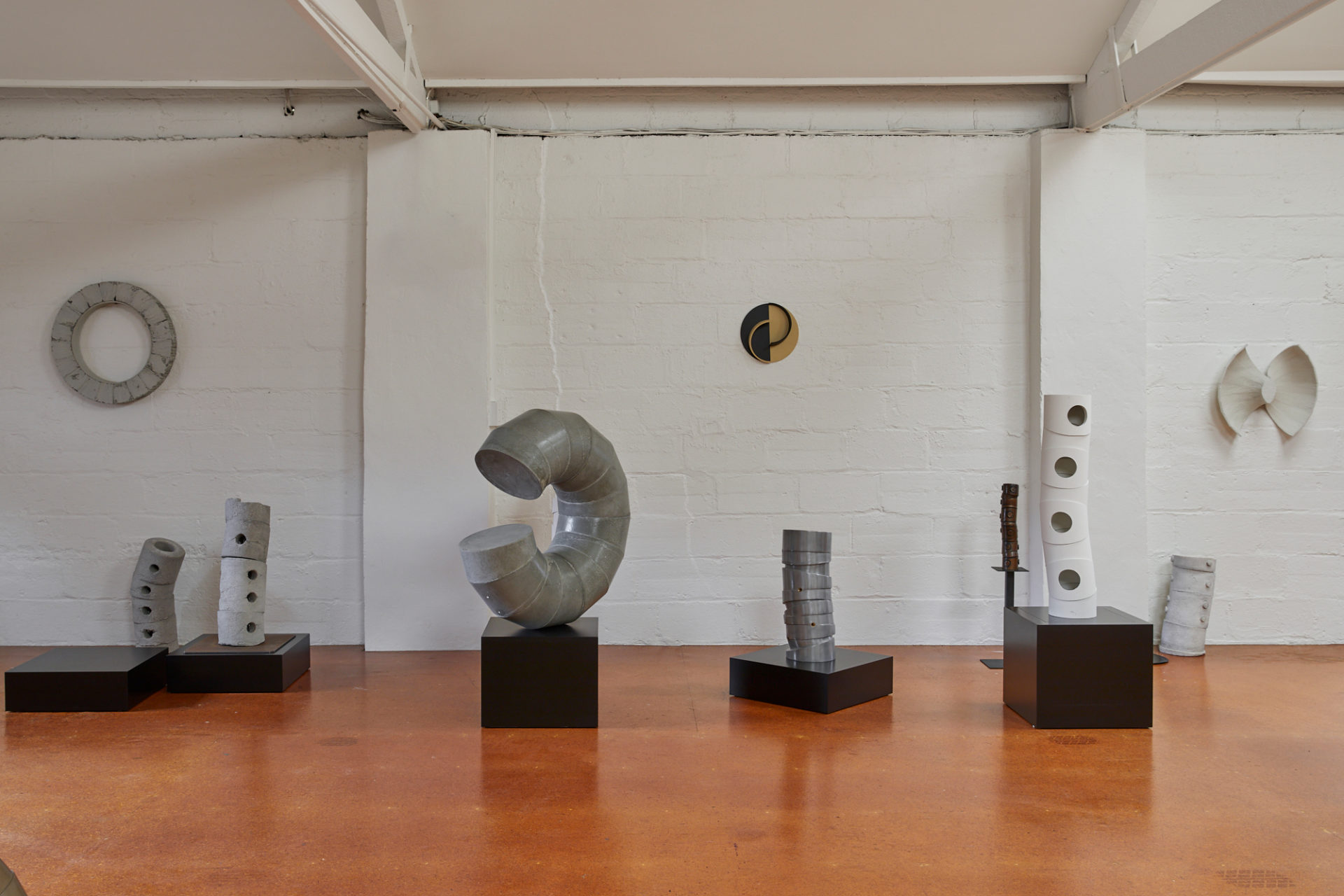