Ray Ching was born in Wellington, New Zealand and has been called an ‘artist’s artist’ and among bird painters is a draughtsman without peer. A renowned artist of life-like portraits, Ching paints obsessively to push the boundaries of bird painting from its more familiar tradition, to break entirely new ground.

Ching first exhibited his bird paintings in Auckland in the 1960s. His first exhibition, Thirty Birds, in 1968 was a sell-out, with Ching attracting the attention of Sir William Collins of Collins Publishing. Sir William, a keen ornithologist, invited Ching to the United Kingdom to produce a book of his bird paintings. However, upon his arrival, Ching also came into contact with the publishers of The Reader’s Digest who, along with Collins Publishing, intended to produce a major book on the birds of Britain. Ching was commissioned to paint 230 full-colour studies, and The Reader’s Digest Book of British Birds, published in 1969, became the world’s most successful and biggest selling ornithological book.

This enthusiastic reception led Ching to produce a series of natural history books. Eleven books documenting his paintings have been published which include: ‘The Bird Paintings’, 1978, ‘Studies & Sketches of a Bird Painter‘, 1981,’The Art of Raymond Ching’, 1981, ‘Wild Portraits‘, 1988, ‘Ray Harris Ching, Journey of an artist‘, 1990, ‘Kiwis‘, 1990, ‘Voice from the Wilderness‘, 1994, and in 2012, ‘Aesops Kiwi Fables. Painting Ray Ching’, the first edition of which sold out within three months. Ching has recently ventured into the genre of graphic novels with the publication of his latest book, Dawn Chorus, which accompanied the first of three exhibitions at ARTIS Gallery, Parnell, Auckland.

Now settled in England, Ching continues to paint birds and animals, as well as remarkable life-like portraits. Working primarily in oils and watercolours, Ching’s works are incredibly detailed with an almost photographic quality. Merging realism with fictional compositions, Ching slowly builds up his paintings layer upon layer, often leaving the underdrawing peeking through the transparent paint.

Ching exhibits regularly in New Zealand and around the world, including Leigh Yawkey Woodson Art Museum in the USA; Brighton Art Gallery and Museum, England; and the Academy of Natural Sciences in Philadelphia. His paintings are held in numerous private and public collections, such as the National Museum of Wildlife Art in the USA, and portraits from his exhibition ‘A True Story’ are held in the Dunedin Public Art Gallery and The Museum of New Zealand Te Papa Tongarewa.

A commission from Sir David Attenborough

'End to the Squandering of Beauty. Entry of the Birds of Paradise into Western Thought' 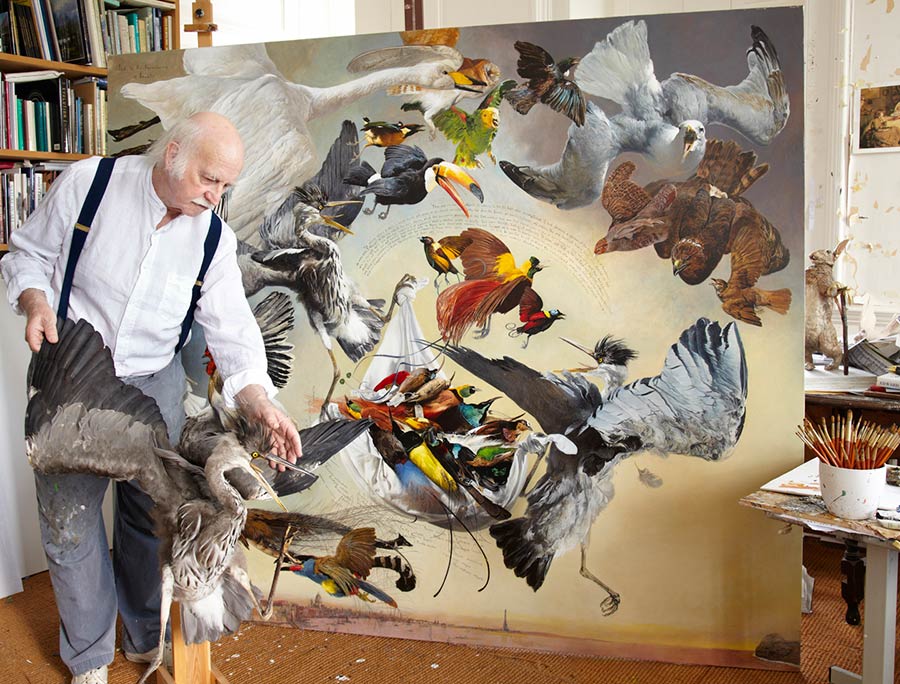 This painting was commissioned in 2011 by Sir David Attenborough and painted by Ray Ching  between August and December 2011. It features on the cover and pages 8 to 19 of Sir David’s  book, Drawn from Paradise, The Discovery, Art and Natural History of the Birds of Paradise.

Titled ‘End to the Squandering of Beauty. Entry of the Birds of Paradise into Western Thought‘, this painting is an allegory depicting the arrival of the Birds of Paradise into European culture. These birds came as skins, prepared by New Guinea Natives who had not preserved any of the birds’ wings or feet. This gave rise to stories that, as birds without feet couldn’t ever come to land; they must therefore have come from Paradise.

The painting takes its title from a quotation by the scientist and discoverer of many Birds of Paradise, Alfred Russel Wallace in his great work, The Malay Archipeligo, 1856:

“I gazed upon this thing of beauty. I thought of the long ages of the past, during which the successive generations of this little creature had run their course, year by year, of being born, and living and dying amid these dark and gloomy woods, with no intelligent eye to gaze upon their loveliness – to all appearance such a wanton waste of beauty.”