From a fine art gallery on London’s Bond St to a cupboard door in a student flat – a valuable piece of New Zealand artwork has survived to tell its tale.

The 1930s Frances Hodgkins drawing called The Sitting Room was discovered in a rubbish skip in Canterbury, England.

Jonathan Gooderham, managing director of Auckland’s Jonathan Grant Galleries, said the “stunning drawing” had been used as a kitchen cupboard door in a student flat and was thrown out during renovations.

Someone spotted it and, thinking it was a print, took it to an auction gallery.

There, an artist represented by Gooderham’s gallery saw it and gave him a call. He subsequently purchased it but given the interest in the post-impressionist style drawing, it was “quite a long drawn out” internet bidding battle.

Gooderham said that in the UK, the drawing’s discovery had run under the headline “Kiwi treasure from a skip”.

Hodgkins, born in Dunedin in 1869, is considered the country’s most important expatriate artist; the art world’s Katherine Mansfield.

Hodgkins died in Dorset in 1947 aged 77. She was the first New Zealand artist to secure a place amongst the English avant-garde.

Gooderham said her work here and abroad was “very, very” sought after and London’s Tate Gallery had several of her paintings. This drawing, worth an estimated $20,000, was done around the time she moved into “open-air” still-life watercolours.

Gooderham said the table in the middle of the drawing was the same one that appeared in Hodgkins’ 1932 painting The Pleasure Garden which is in the Te Papa collection. Despite what the drawing has been through it is “absolutely like brand new”, apart from the back being peppered in Japanese graffiti. “I’ve had it translated and I suggest you don’t photograph it,” Gooderham said. If the gallery can find more Hodgkins’ pieces it will open an exhibition. 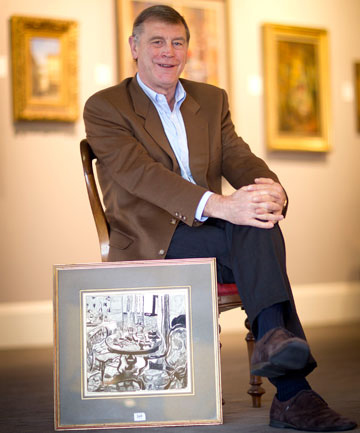