Expatriate New Zealand artist, Douglas MacDiarmid, who lives in Paris, has been vitally involved with key movements in twentieth-century art.

MacDiarmid was born in Taihape on the 14th November 1922. He was educated at the Canterbury University in Christchurch where he was immersed in the New Zealand art movements of the time. MacDiarmid fondly recalls his time spent in Christchurch and states, back in the 1940’s in Christchurch, how passionate we were as raw university students at the mercy of a whole gamut of immature impulsions. During this period MacDiarmid was associated with the avant-garde Christchurch ‘Group’. His tuition by Evelyn Page and his great admiration for Matisse greatly informed his sense of colour.

MacDiarmid served in both the Army and later the Royal New Zealand Air Force during the Second World War. After the end of the war MacDiarmid moved to Paris. He made the move to France in order to pursue his career as an artist and in his own words, to devour the rest of the world. During this period the French School was internationally pre-eminent with the Art Informel movement. The movement abandoned geometric abstraction in favour of a more intuitive form of expression, similar to action painting.

Refusing to be swept up by any particular movements, MacDiarmid’s work of the 1950s and 1960s has been described by his biographer, French art historian, Nelly Finet as ‘nourished by a certain expressionism which his classical formation kept within reasonable limits.’ MacDiarmid’s painterly awareness was inspired by events as various as viewing the work of El Greco in Spain and in Italy, the paintings of Giotto and reading the following line from a book by Bertrand Russell;  ‘The world is composed, not of objects, but events.’

Describing his own artistic practice MacDiarmid states, I neither live nor work to formula, responding mostly to stimuli inner or outer which have the effect of command. Mood evolves as the painting proceeds & decides the degree of abstraction or figuration, in general a blend of both, given the liberty & elusiveness of vision.

Douglas MacDiarmid’s art is held in public collections throughout New Zealand including the Alexander Turnbull Library, BNZ Collection, Hocken Library, Robert McDougall Art Gallery, Dowse Art Museum, Victoria University and Te Papa Tongarewa: Museum of New Zealand. He has exhibited in New Zealand since his 1950 show at the Helen Hitchings Gallery in Wellington and in 1968, the QEII Arts Council held a Retrospective Show of his work. MacDiarmid has also exhibited in Paris, Athens, Casablanca and London to great acclaim. A film, A Stranger Everywhere by Eric Grinda, chronicling the artist’s life and career was screened at the Fesivaldes des antipodes in 2006. 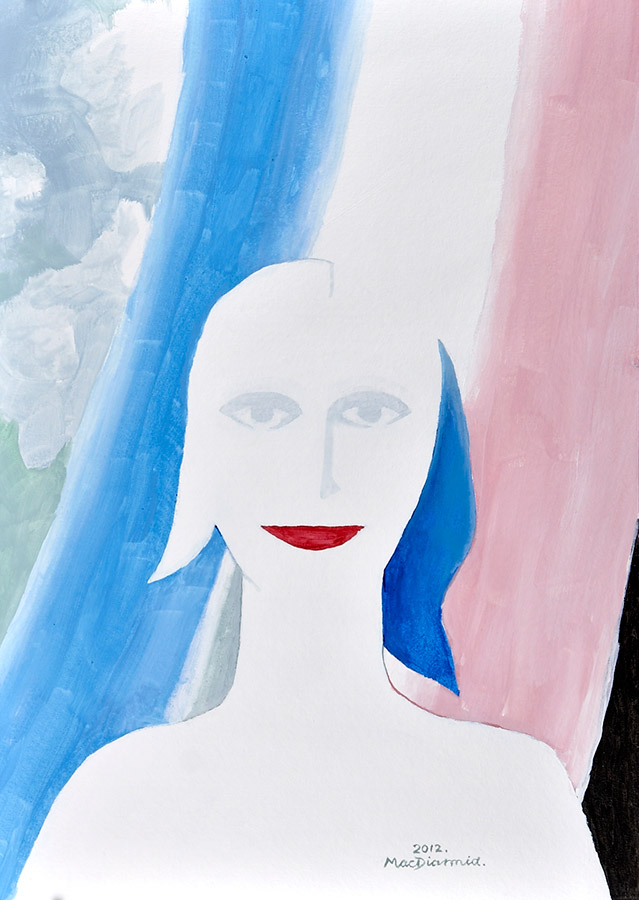