LOOK AT the eyes,” says Claire Colvin. “Soft, steely, laughing, proud – they shine out as if they were drawn yesterday.”

Graphite ghosts of unknown soldiers, sketched by New Zealand’s most famous wartime artist, Peter McIntyre, and discovered by Colvin in a battered manila folder in a thatched cottage in Cornwall.

The soldiers’ portraits came home in February. On November 4 they will be hung for sale in Parnell, Auckland. The collection of 20 never-before-exhibited works includes a dozen portraits. Only four had been labelled by the artist. Months of research has now revealed the identity of a further four, including Sergeant Keith Elliot VC, whose Victoria Cross was stolen (and later recovered) in the Waiouru Army Museum medals heist.

Jonathan Gooderham, managing director of Jonathan Grant Galleries, which is selling the works, said the collection had become an obsession. 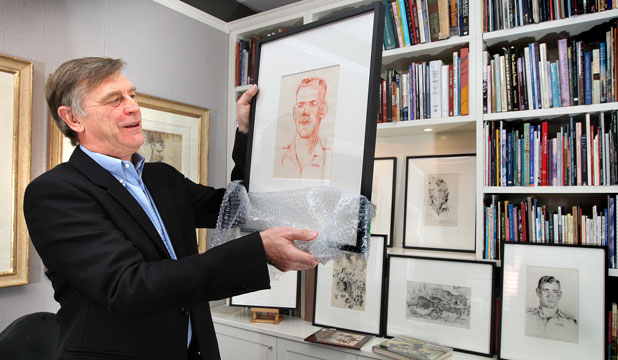 His sketches of soldiers and battlefields came to define New Zealand’s experience of World War II, but how did a stash of Peter McIntyre drawings come to light in a Cornwall cottage?

“I wondered how many of the men in the portraits could still be alive, and thought if they were exhibited, how nice it would be to get them seen by any surviving relatives.” In 2006, a portrait of Charles Upham was auctioned for more than $16,000, but it was a work recreated by McIntyre in the 1980s, when he reproduced many of his damaged war paintings and sketches for a book. “These are original drawings that were made on the spot during these campaigns… there is an intrinsic difference.”

In 1962, reflecting on the 2nd NZEF retreat from Crete, Peter McIntyre wrote: “The stress of battle had brought back individuality to men, so that their very souls lay naked behind tired faces.” McIntyre died in 1995. In The Painted Years he said of his time in North Africa, “in the fellowship of men, at least, they had been the best days in all my life.

“The appalling truth is that to many of my generation, the war came almost as a relief. Somewhere stirring within us was nostalgia for 1914-1918 and the `Tipperary’ of our childhood, and patriotism sanctified us. It was the promise of excitement after a decade of paralysis, the doldrum thirties.”

In the end, it wasn’t enough. “We were soon told that our war wasn’t nearly as tough as the first and we didn’t know what real war was like. We just couldn’t win.” McIntyre made thousands of war drawings and paintings. He went on to become a popular landscape artist – his work sold quickly and well ($22,000 worth in the first two hours of a 1976 show, reported the Auckland Star’s “home extra” edition).

The artist’s son, Simon, says that although his father’s work was popular, “to suddenly see such a big collection is really unusual”. When he meets people who own portraits painted by his father, “they talk about them in hushed tones. There’s always a sense that they treat them with great respect. There’s something about having history through a painting, rather than a photograph.

“Most of my friends grew up with Peter McIntyre books on their coffee table. But the next generation just doesn’t know him… they’ve not seen his work in galleries, because the galleries didn’t buy it.” Commercial success came at a critical price. Art historian Warren Feeney notes one award-winning McIntyre was panned as being “rich in the qualities which make a good calendar”.

And still the public came. In 1995, a retrospective exhibition of McIntyre’s war paintings was viewed by more than 22,000 people. “His sketches and paintings continue to define New Zealand’s memory and experience of the Second World War today,” says Feeney, in an exhibition catalogue which yesterday arrived in the mailboxes of 217 Returned Services Associations around the country. The quest to identify the last of McIntyre’s unknown soldiers has begun in earnest.

Next Friday, she will deliver 60 of her dad’s cartoons to the Alexander Turnbull Library. A packet of photographs by New Zealander George Kaye, of Kiwi soldiers at the Colosseum, will go to the Auckland War Memorial Museum. It was a Google search that alerted Claire to Jonathan Grant Galleries’ interest in McIntyre paintings. Colvin emailed advising she was preparing to have the works valued.

“Nothing had a title… we did the New Zealand archives website, visited the Auckland War Memorial Museum research library day after day, we were in touch with Waiouru, and while we were doing all this, all of a sudden, there would be a whoop, as we found another person.” The exhibition catalogue had to be revised six times. A conte crayon portrait of Elliot was the last to be captioned when Gooderham, by chance, looked closer at an old photograph of McIntyre in Jennifer Haworth’s book The Art of War.

“There was McIntyre drawing this actual drawing. You wouldn’t believe it. It was, literally, `hold the press’.” How did the collection come to rest, unseen since World War II, in a manila folder in Cornwall?

CLAIRE COLVIN is the daughter of Neville Colvin, a Dunedin-born draughtsman and calligrapher for the Second New Zealand Expeditionary Force. After the war, Colvin worked as a political cartoonist for Wellington’s Evening Post, rising to international fame in the United Kingdom where he drew the popular Modesty Blaise strip.

For the thousands who served in World War II, Colvin is also remembered as the man who created the cartoon character Clueless, “the most stupid little sod you could imagine”. Every week, Clueless’s latest exploit featured in the NZEF Times. On March 12, 1945, the Cairo-printed newspaper published evidence of a connection between Colvin the cartoonist and McIntyre the painter – Clueless peels spuds while having his portrait painted: “Don’t forget my stripe, Captain McIntyre,” reads the caption.

That cartoon, says a very excited Gooderham, “is the actual, total connection between everything… the absolute link”. Last week, in his Parnell office, with a McIntyre portrait of a young Kiri Te Kanawa on one wall, and two Frances Hodgkins paintings on the other, Gooderham speculated that the soldier artists had swapped cartoons and drawings. “You know that there is a time-honoured tradition of artists giving works to each other. Our artists still do it.”

But it was 55 years after World War II ended before Claire Colvin found her father’s McIntyre drawings. “My dad was a very modest man,” she told the Sunday Star-Times last week. “There was never any of his work on display in the house… it was stashed away in two plan chests he made to fit in the wardrobe of our family home in Hampstead, London.”

After Colvin’s death, his family discussed returning his New Zealand cartoons to the Alexander Turnbull Library, but never got beyond sorting through the first plan chest. “There were so many drawings.” And then, last year, Claire’s 16-year-old daughter, who has Italian heritage, wanted to visit Italy. “We went to Rome and saw the sights. I knew dad had served there, and returned as a sightseer with mum in the 50s, so I wondered if I was treading in his footsteps.”

As a child, Claire once asked her father for stories about the war. “He said he never wanted to talk about it, and I never dared ask him again.” She came home from Italy and made good on the promise to finally sort her father’s drawings – and that’s when she found the manila folder.

“I would have bought them,” confirmed Jonathan Gooderham. He has been collecting and exhibiting McIntyres – mostly postwar landscapes – since the 1990s. “I’m a country boy, from Gloucestershire, and I’ve just always loved the New Zealand landscape. Whenever I’ve seen a Peter McIntyre painting of a cattleyard or drovers and horses… I’ve just had to buy them.” He paid “really serious money” once for McIntyre’s depiction of Trafalgar Square – and then knocked on the door of New Zealand House and went to the top floor with a Defence attache to work out exactly where the artist painted.

Gooderham says he could have picked up the Colvin Collection at auction for “fifteen hundred quid”. “But they were sand-damaged, creased, there was soil on them. I thought it would be far better all round to research them, publish a catalogue and make sure they got to the right places.”

Where it has been possible to track down soldiers’ relatives, families have been given first option to buy, at a reduced rate. Gooderham says the portraits will have a $12,500 price tag in a relatively untested market.

1910: Born in Dunedin, son of Isabella and Peter (a lithographic artist and one of the founders of the Caxton Printing Company).

1939: Enlisted with the 34th Anti-tank Battery, an NZ unit formed in London, and sent to Egypt as a gunner.

1947: Worked from a studio in Dunedin, listing himself as a “cartoonist” but making an income from portraits and landscape painting.

1962: Won Hay’s Art Competition; published The Painted Years, the first of eight books written and illustrated between then and 1981.