End to the Squandering of Beauty

This painting is an allegory depicting the arrival of the Birds of Paradise into European culture. These birds came as skins, prepared by New Guinea Natives who had not preserved any of the birds’ wings or feet. This gave rise to stories that, as birds without feet couldn’t ever come to land; they must therefore have come from Paradise.

This painting was commissioned in 2011 by Sir David Attenborough andRay Ching painted the work between August and December 2011. It features on the cover and pages 8 to 19 of Sir David’s most recent book, Drawn from Paradise, The Discovery, Art and Natural History of the Birds of Paradise, published by HarperCollins, September 2012.

The work was exhibited at; the 2013 Auckland Art Fair, New Zealand, the 2013 Centenary Exhibition at Everard Read Gallery, South Africa, the Inspiration Wild, An Artistic Celebration of Nature and Environment at The Wildlife Art Museum of Australia and at the Late Harvest exhibition at the Nevada Museum of Art in 2013. 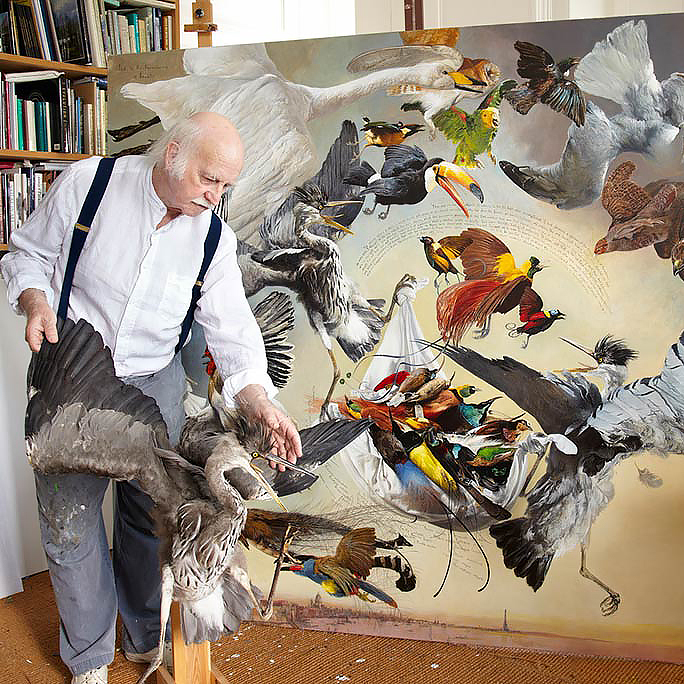 Ray Ching
End to the Squandering of Beauty Entry of the Birds of Paradise into Western Thought
Oils on canvas, 1800 x 2400 mm
Signed and dated 2012