Frances Mary Hodgkins (1869-1947) is regarded as one of New Zealand’s leading expatriate artists. Her works capture the spirit of an era greatly influenced by Impressionism and the beginnings of en plein air painting, Post-Impressionism, Fauvism and two World Wars. With a professional life that spanned fifty-six years, Hodgkins was one of the foremost artists of her generation. During her time in Britain she became one of the leaders of the English avant-garde movement. She travelled extensively and evolved her style from impressionistic watercolours to striking twentieth-century modernist paintings.

Hodgkins was born on 28th of April 1869 in Dunedin, the third child and second daughter of William Mathew Hodgkins, barrister and solicitor and amateur painter, and Rachel Owen. While her older sister Isabel (1867-1950) inherited their father’s artistic talent, Frances developed more slowly, and the earliest of her sketches date from about 1886 when the family was living at Ravensbourne, near Dunedin. In November the following year she exhibited for the first time with the Otago Art Society, and subsequently with the Canterbury Society of Arts and the New Zealand Academy of Fine Arts, Wellington. She was elected a working member of the Otago Art Society in 1890. Her fifth showing with the Otago Art Society, in November 1894, included the watercolour ‘Old Boathouse’, ‘Port Chalmers’ and four other works, ‘Water at Leith’, ‘Study of a Head’, ‘Washing Day’, and ‘Study in Charcoal – Girl Reading’. Frances Hodgkins’ inclusion in the 1894 exhibition was favourably reviewed by local newspapers, the Otago Daily Times noting that one of her two figure subjects was ‘painted with great skill’ and that her work generally showed ‘strong signs of earnest and attentive study’.

It is likely that Hodgkins produced Old Boathouse, Port Chalmers whilst travelling around the Otago region with her painting companion Effie Spence. The Spence family, from Dunedin, later retired to Upper Norwood, southeast London, and accommodated Hodgkins when she first arrived in the city in 1901. Three months after showing at the 1894 Otago Art Society exhibition, Hodgkins began attending the Dunedin School of Art and Design preparing for the South Kensington examinations for which she received first-class passes in both the elementary and advanced stages.

Hodgkins left Dunedin on the Moana on the 6th of February 1901 bound for Sydney, via Lyttelton and Wellington, and from there sailed for London, where she arrived on 7th of April. She stayed with the Spence family and Effie accompanied her on outings to visit galleries and museums in London. Eric McCormick described how the Spence’s had established ‘a small corner of Dunedin’ in London.

During her first few months in London Hodgkins studied drawing with Ernest Borough Johnson (1866-1949) at the City of London Polytechnic. At the end of June she joined a summer sketching class in Caudebec en Caux in the Normandy region of northern France, led by Irish-born and Penzance-based artist Norman Garstin (1847-1926). Hodgkins subsequently visited Paris and Italy and returned to London in late February 1902. She joined another of Garstin’s summer schools in Dinan, Brittany, in July 1902, and although the weather was generally wet, she managed to paint most days.

With the arrival of her New Zealand friend Dorothy Kate Richmond (1861-1935), Hodgkins was encouraged to remain in Europe. The two artists spent time working together, their paintings permeated with what Joanne Drayton describes as an ‘end-of-summer golden glow’. According to Mary Kisler, ‘Hodgkins works from this first year abroad demonstrate particular subjects that mark much of her oeuvre over the next few years: streets (preferably lined with quaint buildings) leading to the focal point of a church or a tower in the distance, river or harbour views, and, more frequently, studies of markets’. Hodgkins left Dinan in October and returned to London, which she described in a letter to her mother as a ‘giddy vortex … all is rush, bustle, dirt, fog, rain, fag, busses and fusses’.

In 1902 Hodgkins, along with other New Zealand women artists including Margaret Stoddart (1865-1934), Grace Joel (1865-1924) and Dorothy Richmond, were invited to exhibit at the Bayswater, London Gallery of Baillie and Bonner, the former being Wellington-born artist and dealer John Baillie (1868-1926).9 The Colonial Art Exhibition opened on the 4 October, and Hodgkins was represented by sketches produced at Dinan depicting the town’s streets, markets and peasant women.

A month after her London showing, Hodgkins exhibited sixteen paintings in the 1902 Annual Exhibition of the Otago Art Society, which opened on the 8 November. Of these, five titles referred to Dinan. An enthusiastic Otago Daily Times reported that Hodgkins had found ‘a happy hunting ground for her fine artistic talent in the old French villages’, and done full justice to the many ‘quaint and curious subjects to be found there’, as seen in ‘Breton Pottery’.

In mid-1903, in addition to exhibiting at the Royal Academy, Frances Hodgkins showed ten works with the Fine Art Society in Bond Street, London. She also made her first trip to Tangier in Morocco, where she stayed for four months, and later that year visited Holland where she spent several months teaching. She joined Garstin’s summer class in Bruges, Belgium, moving on to Rijsoord near Rotterdam and Delft in the Netherlands before returning to England. 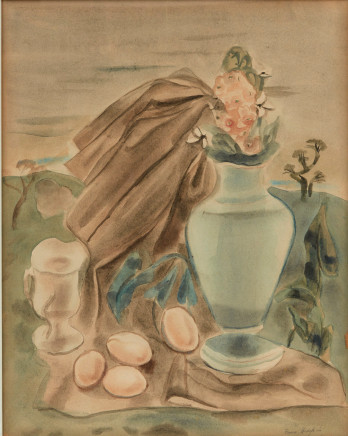