The New Zealand Portrait Gallery in Wellington is currently holding a large-scale exhibition of works by Frances Hodgkins.

Curated by Pamela Gerrish Nunn, Frances Hodgkins People focuses on the significance of the human figure and face in the work of this iconic New Zealand artist.

The exhibition showcases works from both public and private collections, including several pieces loaned to the New Zealand Portrait Gallery by Jonathan Grant Gallery.

With sketches and paintings of friends, family members and people she met along her travels, the exhibition spans Hodgkins career and offers a rare opportunity to experience the life of this beloved New Zealand artist – not through her landscapes or still-life’s, but through the people she knew and the way she painted them.

Listen to curator Pamela Gerrish discuss the exhibition on RNZ

Frances Hodgkins (1869 – 1947) is regarded as one of New Zealand’s most renowned artists. Her works capture the spirit of an era greatly influenced by Impressionism and the beginnings of en plein air painting, Post- Impressionism, Fauvism and two World Wars. With a professional life that spanned fifty-six years, Hodgkins was one of the foremost artists of her generation. During her time in Britain she became one of the leaders of the English avant-garde movement during the 1930s and 1940s, and was one of the first New Zealand-born artists to achieve such stature.

Born in Dunedin on 28th April 1869 to the distinguished watercolourist William Mathew Hodgkins and his Australian wife, Rachel Owen Parker, Frances Hodgkins’s artistic education continued outside the sphere of influence of her family. In 1893 she studied with the renowned expatriate artist Girolamo Pieri Nerli, (1860 -1926) who encouraged her in portraiture and figure painting, and then from 1895-96 she attended Dunedin School of Art.

Having left New Zealand for Europe in 1901, Hodgkins finally settled in England in 1913, where she spent most of her time in London. She took it upon herself to further her career in Europe and Britain by holding regular exhibitions of her work and becoming one of the first female teachers at the prestigious Académie Colarossi in Paris. Hodgkins toured Normandy and Picardy with her group of students, sketching in the villages of Concarneau, Le Havre and St Valery-sur-Somme … 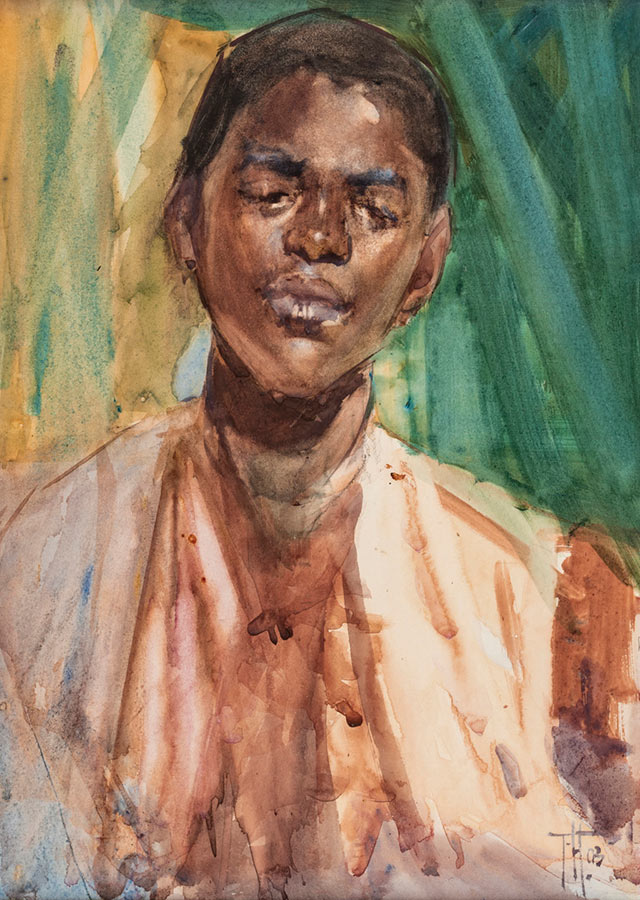