Frances Hodgkins is regarded as one of New Zealand’s most renowned artists. Her works capture the spirit of an era greatly influenced by Impressionism and the beginnings of en plein air painting, Post-Impressionism, Fauvism and two World Wars. With a professional life that spanned fifty-six years, Hodgkins was one of the foremost artists of her generation. During her time in Britain she became one of the leaders of the English avant-garde during the 1930s and 1940s, and was one of the first New Zealand-born artists to achieve such stature.

Born in Dunedin on the 28 April 1869 to the distinguished watercolourist William Mathew Hodgkins and his Australian wife, Rachel Owen Parker, Frances Hodgkins’s artistic education continued outside the sphere of influence of her family. In 1893 she studied with the renowned expatriate artist Girolamo Pieri Nerli, (1860 -1926) who encouraged her in portraiture and figure painting, and then from 1895-96 she attended Dunedin School of Art.

Having left New Zealand for Europe in 1901, Hodgkins finally settled in England in 1913, where she spent most of her time in London. She took it upon herself to further her career in Europe and Britain by holding regular exhibitions of her work and becoming one of the first female teachers at the prestigious Académie Colarossi in Paris. Hodgkins toured around Normandy & Picardy with her group of students, sketching in the villages of Concarneau, Le Havre and St Valery-sur-Somme. It was on these teaching trips that Hodgkins met and befriended some of her most loyal companions, one of the most significant of which was Jane Saunders. Hodgkins first met Saunders and her partner, Hannah Ritchie, in 1911 at Concarneau and friends such as this pair, continually supported her throughout her life. Saunders and Ritchie also collected a number of major works by Hodgkins, some of which are exhibited in this collection. Hodgkins continued to paint and teach and hold regular sketching classes in France until the outbreak of the First World War (1914 -1918).

Hodgkins spent the war years based in St Ives, Cornwall, where fellow artists Cedric Morris and Arthur Lett Haines became her close friends. After the war Hodgkins continued her teaching practice as well as working fervently in order to be able to exhibit at the Salon d’Automne in Paris. In 1927 Hodgkins exhibited a work with the New English Art Club, where she caught the attention of the prominent London dealer Arthur Howell, who subsequently offered Hodgkins a contract. This in turn led to Hodgkins association with the Lefevre and Leicester Galleries – a professional relationship that was to last until the end of her life.

During the Second World War (1939 -1945) Hodgkins was in her 70’s and less resilient both physically and emotionally to the strains imposed by war. Consequently, she moved to a small studio at Bradford-on-Tone in Somerset where Geoffrey Gorer’s cottage was made available to her. Hodgkins continued to work ardently during this period and as a result she experienced the unexpected success of an exhibition held in 1940. This marked the turning point in Hodgkins career and from that time on her paintings were increasingly sought after. Following on from her success, Hodgkins was chosen in the spring of that year, to represent Britain at the Venice Biennale. Further accolades followed in 1942 when she was honored with a Civil List pension for her services to art and in 1944 when the Tate Britain bought one of her works. This was undoubtedly a highpoint in her career. In November 1946, to enthusiastic critical acclaim, the Lefevre Gallery held a retrospective exhibition of Hodgkins works. The exhibition included 64 paintings and 17 drawings ranging from 1902 to 1946 and the exhibition received a warm and positive response from the London press.

Today, Frances Hodgkins is hailed as one of New Zealand’s most preeminent artists and her work is held in consistently high regard. 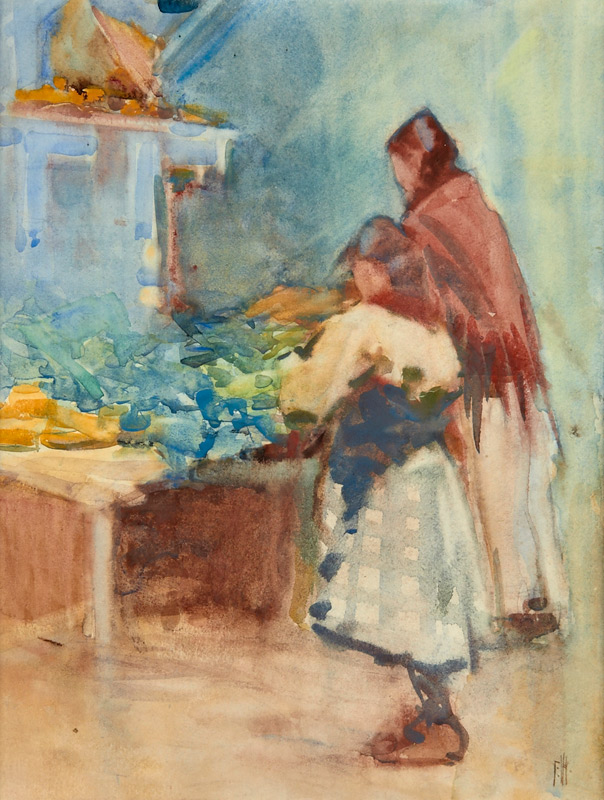