They were sketched amid the hell of Gallipoli, drew the complements of the World War 1 campaign’s foremost generals, and were later shown before the Royal Family.

A century later, Aucklanders can view up close a small collection of works by one of New Zealand’s most important wartime artists.

The series of 10 lithographs by Sapper Horace Moore-Jones – who famously depicted Private John Simpson Kirkpatrick and his donkey at Gallipoli – was recently acquired at auction for more than $6000 by art dealer Jonathan Gooderham.

They are now on display at Jonathan Grant Galleries in Parnell.

It comes as a bronze statue of Moore-Jones was recently unveiled in Hamilton, where the artist died in 1922 after rescuing people from a burning hotel, and an exhibition, including a number of his watercolours, has opened at the Wellington Cathedral of St Paul.

Mr Gooderham said the Moore-Jones works he bought had never been framed, and remained separated by original sheets of 1916 tissue paper. Despite their age – and having been created on the battlefield and later carted around the world – the colours were as brand new and appeared “absolutely brilliant”, he said. They depict well-known Gallipoli landmarks, giving views of Anzac Cove, Shrapnel Gully, Walker’s Ridge, Quinn’s Post and Courtney’s Post. Given the level of detail Moore-Jones skilfully captured – at times while crawling through trenches and behind enemy lines – his works were also used for military purposes during the ill-fated 1915 campaign.

Lieutenant-General Sir William Birdwood, commander of 1st Anzac Corps, described their standard as “excellent” and noted the conditions in which they were sketched. “Many of Sapper Moore-Jones’ pictures were, I know, done operating, and being so full of detail as they are, give a good impression of the conditions of life in which our troops were working for some eight months.” Lieutenant-General Sir Alexander Godley, commander of the New Zealand Expeditionary Force, also remarked the sketches “accurately and faithfully” portrayed the surroundings.

“I made my first acquaintance with these sketches in the trenches, coming by chance one day upon the artist while he was busily engaged upon one of them.” An expanded collection of his watercolour works featured in an exhibition at New Zealand House, arranged by former Prime Minister and High Commissioner Sir Thomas Mackenzie, and were shown to King George V, along with the Queen, Prince Albert and Princess Mary, in 1916.

Yet the New Zealand Government turned down an offer to buy them, so the artist sold them to the Australian government for what amounts to about $130,000 today. His most famous piece, Private Simpson, D.C.M., & his donkey at Anzac, 1918, sold last month at Parnell’s International Art Centre for $257,950, inclusive of all premiums.

Mr Gooderham said other sets of his works had been bought and sold over the years, including one collection he sold in 1988 for about $900. “But this set, I don’t want to sell them, I just want to show them.” Last year, Mr Gooderham helped solve a long-standing mystery behind an oil painting of Anzac Cove, formally and finally confirming its creator as Oamaru artist Alfred Avery Forrester.

He plans to show the Moore-Jones set for the next month. 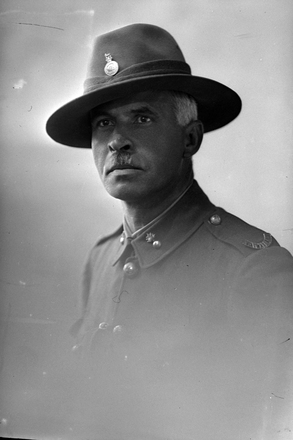