A painting that symbolises the pain and tragedy of the failed  World War I Gallipoli campaign was sold yesterday to an undisclosed bidder.

Richard Thomson of the International Art Centre, where the auction was held, confirmed the painting was bought by a private buyer and would remain in New Zealand.

The work, which depicts a medic transporting a wounded soldier by donkey to a first aid post, is thought to have been painted in 1917.

Moore-Jones initially believed the Anzac medic was John Simpson Kirkpatrick, an Englishman who enlisted with the Australian Imperial Forces when war broke out.

However, the medic in the painting is actually Richard Henderson, a Waihi-born man who was a teacher in Auckland when he enlisted in 1914.

Moore-Jones did the painting from a photograph taken by Dunedin medic, James Jackson, who identified the man in the photo as Henderson.

Moore-Jones was known as “Sapper”, even when he was in London in 1916 displaying his paintings and having a private audience with King George. He remained an enlisted man, helping the sick as he worked as a field artist.

Moore-Jones died in a Hamilton fire in 1922 still believing he had painted Simpson. 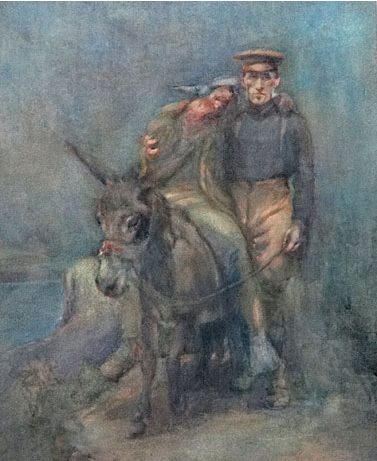 Horace Moore-Jones
Simpson and his Donkey