An “iconic” painting is now on display at the National Army Museum in Waiouru.

The original watercolour of The Man with the Donkey – often incorrectly called Simpson and his Donkey – shows how World War I medics used donkeys to help carry the wounded to safety through the gullies and ravines at Gallipoli, museum marketing manager Nicola Bennett said.

The artist, Horace Moore-Jones, enlisted with the British section of the New Zealand Expeditionary Force during WWI and took part in the allied landing at Anzac Cove on April 25, 1915.

“Two of the New Zealand medics amongst the first group of stretcher bearers were William ‘Bill’ Henry, who was awarded the Distinguished Conduct Medal on landing day at Gallipoli, and Richard ‘Dick’ Henderson, who was later awarded the Military Medal on the first day of the Somme for rescuing wounded,” Ms Bennett said.

“It is believed that both Henry and Henderson were the models for the Sapper Moore-Jones painting.”

During the war, Moore-Jones worked with the Anzac printing section to make topographical pencil and watercolour sketches of the landscape of Allied and Turkish positions.

“Late in 1915 he was wounded and invalided to Britain where, once recuperated, he painted further watercolours based on his Gallipoli experiences and an exhibition of his work was held at New Zealand House in April 1916.

Several years later, Moore-Jones painted the first of his three The Man with the Donkey watercolours which he based on a photograph of Dick Henderson.

Moore-Jones was killed in a fire in Hamilton in 1922 while trying to save others.

“Sadly for New Zealand, following his death, the New Zealand government in their lack of wisdom did not take up the offer of his wonderful Gallipoli sketches and now they form a vital part of the art collection at the Australian War Memorial in Canberra.

“The National Army Museum is delighted to have this original watercolour on loan,” Ms Bennett said.

Jonathan Gooderham of Jonathan Grant Galleries in Auckland organised the loan of the painting.

The painting is on display in the museum’s medal repository. 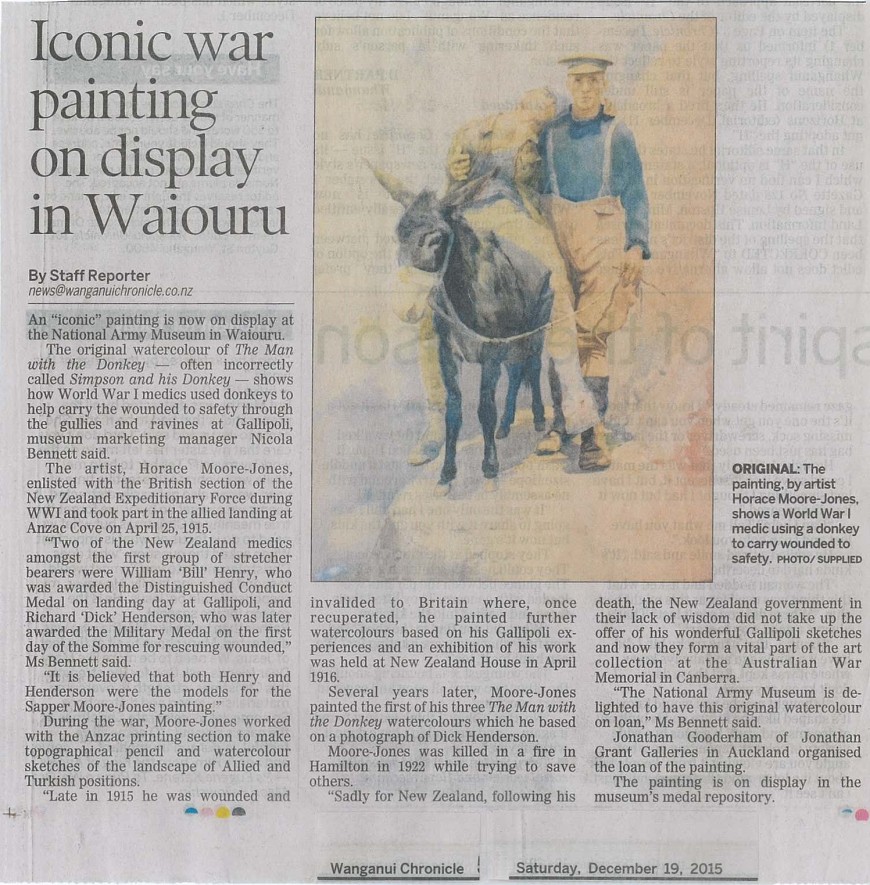