Marcus King was born in 1891 in Manaia, Taranaki, where his father was postmaster. In his ninth year the family moved to Tapanui, Southland. King yearned for a career in art and at the age of 15 he won a junior cadetship in the architectural division of the Public Works Department in Wellington.

A transfer to Auckland in 1906 enabled him to attend evening classes at the Elam School of Art under an inspiring Swedish painter, Edward Friström. The young Marcus King and Edward Friström developed a lively friendship and went sketching together around the Auckland region. When King returned to Wellington in 1915, Friström stayed with him and the two artists continued working together and exhibiting at the New Zealand Academy of Fine Arts.

The First World War disrupted this happy and fruitful time. In 1915 Fristöm left New Zealand for the United States of America and King later enlisted in the army. After returning from the War, King left the civil service and went to work in advertising as a commercial artist. During this time he also taught art at the Wellington Technical Institute. It was King’s practice as a well-established commercial artist that led him to join the Quoin Club. The club, which borrowed its name from the printing process, promoted the fostering of Arts & Crafts in Auckland. The club and Marcus King together promoted the idea of utilizing traditional commercial printing processes in order to create works of fine art. This experience is evident in King’s commercial posters of the time.

During his commercial career, King kept up his association with the Academy of Fine Arts and served on the council from 1929 to 1941 with artists such as D. K. Richmond, N. Welch and M. Tripe. King also continued to exhibit at the Academy until 1964. After ten years of working in various agencies, King returned to the civil service in 1935. Marcus King is perhaps best known for the significant body of commercial and fine art work that he created for the New Zealand Tourism Department. King’s paintings and posters were of such quality that they were sent all over the world, marketing the pristine beauty of Aotearoa, New Zealand.

Having established himself as a painter of considerable ability, King received numerous commissions. The Wellington City Council commissioned an oil painting of the city and harbour, which was given by the city to Lord Freyberg when he finished his term as Governor General. Another commission saw two of his paintings destined for the South Pole. One of his favourite projects during this time was a series of paintings depicting Maori life prior to the arrival of the Europeans. Two of these works used to hang in the Commonwealth Institute in London.

Marcus King has been described as ‘small and sprightly’ with a ‘huge personality’, a very religious man, who was widely admired for his creative talent. It was his habit to sign his paintings with a large flamboyant signature and he always carefully crafted his own canvasses, often using Swedish hardboard.

King holds an important place in 20th Century New Zealand art following a distinguished career as an artist and also as one who used his talent to capture and promote the beauty of New Zealand. 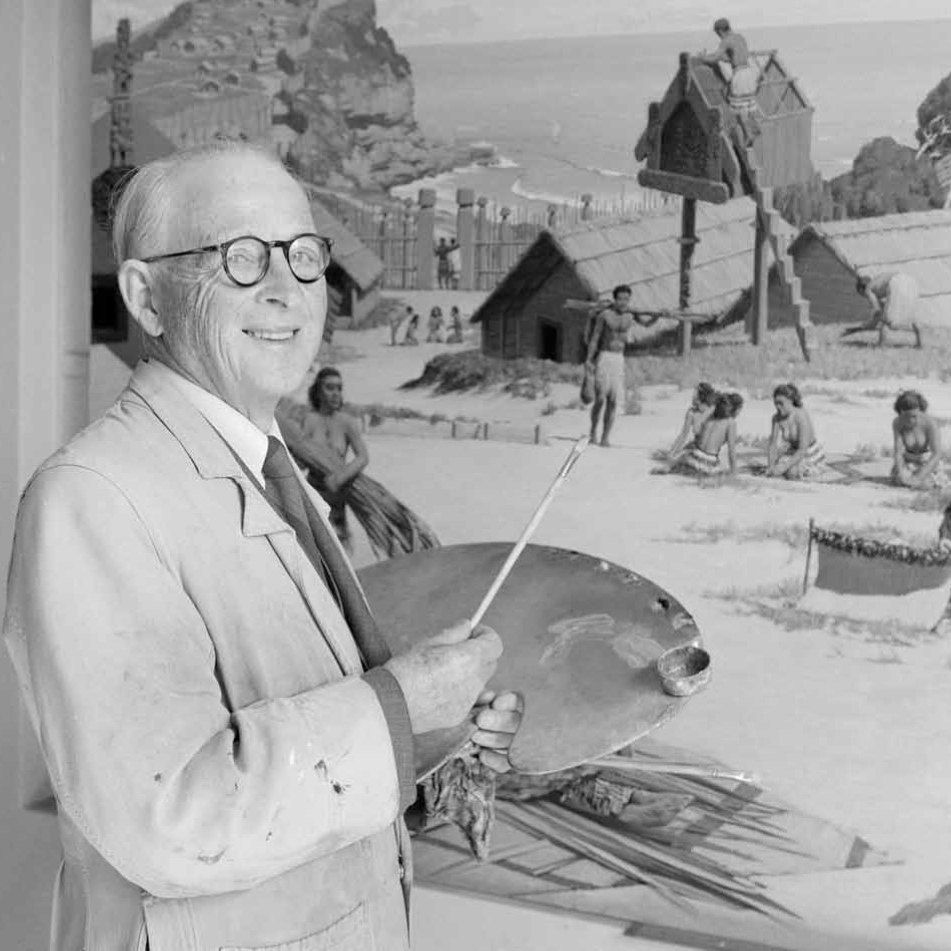