Painted in 1976, inspired by a trip to the French Caribbean island of Guadeloupe, (the birthplace of MacDiarmid’s partner Patrick Andre Stefane) the painting depicts the popular creole dice game ‘Pataclaq’. Its whereabouts previously unknown, ‘Pataclaq (Bailiff XI B)’ is now available to view at Jonathan Grant Galleries.

MacDiarmid’s new biography ‘Colours of a Life’ features an old image of the work, and details the events surrounding the exhibition of the painting.

‘Pataclaq’ was exhibited at London’s New Zealand House in October of 1976 as one in a series of MacDiarmid’s Guadeloupe paintings. The paintings marked a departure from the more intellectual styles MacDiarmid had been exploring, and a shift towards a simpler approach inspired by the vivid environment and ‘luminous colours’ of Guadeloupe. Lush and energetic; the works received praise from friends and MacDairmid was confident they were amongst his best.

The exhibition was, however, doomed to fail from the start. British customs held the paintings until the eleventh hour, leaving no time for framing, and as ‘Colours of a Life’ describes; “Douglas scrambled to set twenty-seven pictures on squabs of brown cloth on white wall to save the day.”

“The cocktail reception went well enough, with a broad mixture…from Whitehall gents to scruffy NZ hayseed intellectuals”.  But even if the pound had not collapsed the week before, the harsh reality of London’s racially charged political climate in the mid 70’s made the paintings very difficult to sell. As MacDiarmid reported “It looks tremendously well on the walls, the people who came have certainly liked it but nothing could be further from the sympathies of present- day London”. 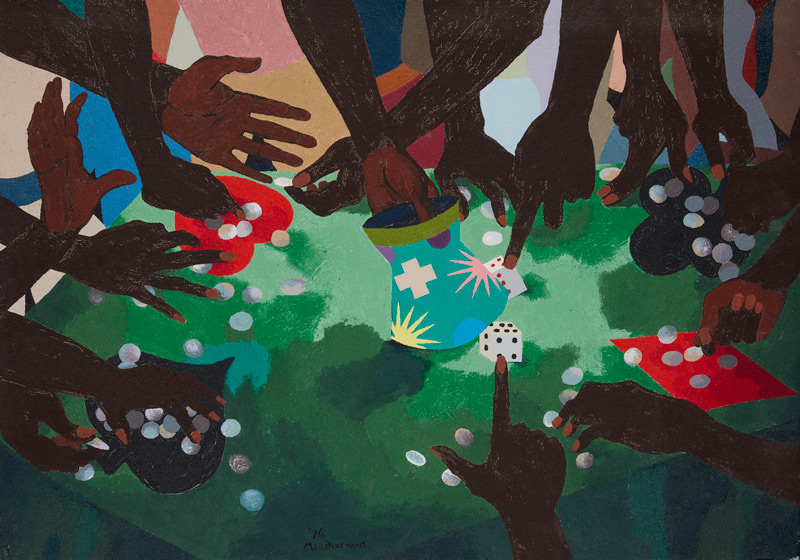