A casually reclining nude from 1863 lays claim to being the first modernist painting. Olympia, by Edouard Manet (1832-83), turned her back on the past, firmly rejecting the idealized pose demanded by the aesthetics of the day. In the decades following this Salon sensation, painters increasingly explored alternative and innovative ways of presenting their world, and the aims of art and nature would appear incompatible. Another breakthrough was achieved around 1909 when Wassily Kandinsky (1866-1944) produced the first abstract art, a pictorial statement that rejected representation and made no reference to anything beyond the canvas. Other artists experimented with form of abstraction, an activity that reflected changes taking place in the wider world. Science was now unravelling the mysteries of the atom, while Einstein was disposing of the traditional belief in the absolute and unvarying nature of matter.

Direct experience of recent developments in European art had first reached New Zealand with the arrival in the early 1890s of the highly influential James Nairn (1859-1904), Petrus van der Velden (1837-1913) and Girolamo Nerli (1863-1926). Frances Hodgkins (1869-1947) took lessons from Nerli, and following her first visit to England in 1901 her work showed an increasing understanding of modernist developments. Her mature style is apparent in Burford High Street, Oxfordshire, c.1922, in which buildings and background landscape were flattened on the picture plane, and all elements connected by a fluid gestural line.

Among those who introduced New Zealand to these new ideas from Europe was John Weeks (1888-1965), who taught at the Elam School of Art. Robert N. Field (1899-1987), an English artist and teacher brought here under the La Trobe scheme, proved inspirational for a younger generation of artists including M.T. Woollaston (1910-98) and, in particular, Colin McCahon (1919-87), who developed a highly personalised form of abstract expressionism. Milan Mrkusich (b.1925), a pioneer of abstract art in New Zealand, began painting in the late 1940s, initially attracted by a non-figurative geometric approach he knew only through reproductions in overseas publications.

From this he developed formal arrangements of squares and circles, leading in the 1960s to his large signature monotonal colourfields. This reduction of elements, moving toward an abstract minimalism, was also a stimulus for the younger Geoff Thornley (b.1940), whose work is distinguished by shaped formats and grid-based compositions. Another early pioneer, who sought to reconcile

European modernist ideas with a local reference, was Gordon Walters (1919-1995). In 1956 he began his extensive series of paintings based on derivations of the curvilinear koru motif, common to Maori decorative art. A similarly hard-edged approach to abstraction was adopted in 1976 when Elam-trained Ian Scott (b.1945) began his well-known and extensive Lattice series. On one level the over-and-under arrangement of their regular rectangular elements suggests a trellis, while also evoking the basket-weaving pattern common throughout the Pacific.

English-born John Blackburn (b.1932) lived in New Zealand in the 1950s, and following his return to England began painting in a style influenced by the St Ives school. He developed an abstract approach, arranging simple and loosely articulated forms in a limited range of colours. Terry Frost (b.1915), also associated with the St Ives painters, studied at Camberwell School of Art, London, and developed an abstraction using simple geometric forms based on personal observations, such as boats in a harbour.

Another English-born artist engaged in a form of abstraction is Auckland-based Matthew Browne (b.1959), a graduate of both Camberwell and Elam. His work echoes British modernists as well as American Expressionists, particularly Barnett Newman (1905-70), while his looping organic forms bring to mind those by French artist and Dadaist Hans (Jean) Arp (1887-1966). New Zealand-born Bridget Bidwill (b.1956) graduated from the Ilam School of Fine Arts, Christchurch, and under the influence of European modernism has developed what has been described as a ‘personal alphabet of shapes’, shadow-like elements with fleeting resemblances to such everyday objects as bottles and leaves.

It is now 120 years since a Wellington reviewer described a coastal sketch by the recently arrived James Nairn as ‘execrable in its nightmare of blues and greens’. Since then, New Zealand artists with a proclivity for modernist and – more extreme – abstract tendencies, have encountered resistance in a culture with a traditional preference for realistic landscapes. But they have persisted, and their wide-ranging personal responses to the challenge have resulted in a constantly evolving body of modernist motifs that are, in the spirit of Olympia,both innovative and contemporary. 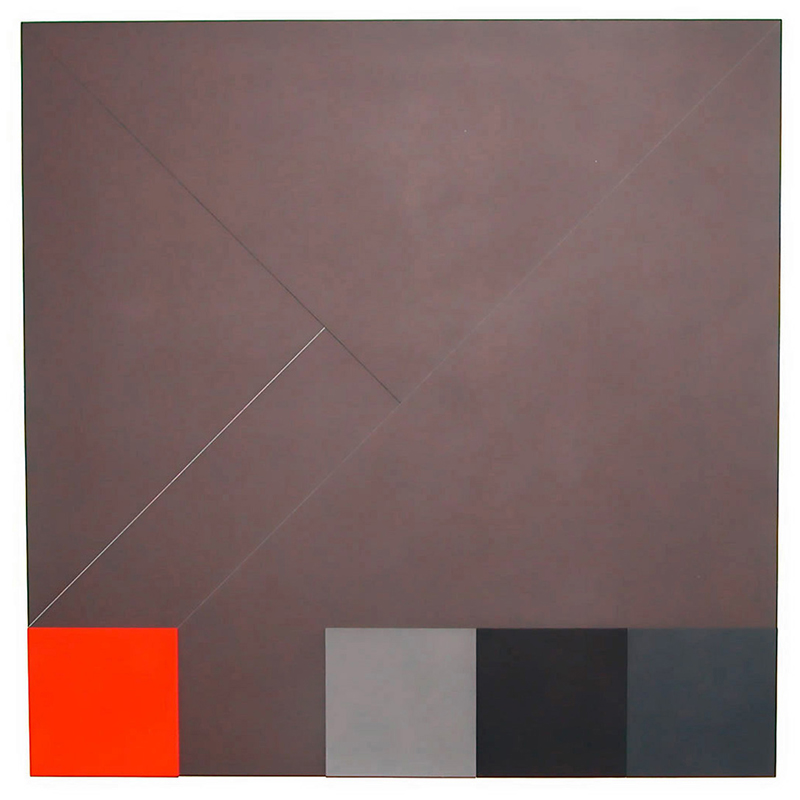