Our People Our Land

New Zealand has the distinction of being the last habitable landmass to be settled by humans. The people came, eventually, in two waves; from Eastern Polynesia around 1300 AD, and from Europe some five centuries later. The latter arrivals brought the tradition of easel painting, and the landscape was – and remains – an obvious and popular subject. In a speech at the 1875 exhibition of the Auckland Artists’ Society, Josiah Clifton Firth described New Zealand as ‘the Italy of the Pacific’ in terms of what its climate and scenery could offer artists. He believed it held ‘a foremost place in landscape painting’, while he also encouraged artists to tackle portrait subjects, in particular historical figures and ‘the picturesque Maori’. The challenge was taken up in 1898 by Charles F. Goldie and Louis J. Steele in their massive collaboration, The Arrival of the Maoris in New Zealand (Auckland Art Gallery Toi o Tamaki). Goldie subsequently established a reputation for his precisely detailed portraits of Maori, and painted Rakapa Hinetapu, the wife of an Arawa chief and subject of Memories: Rakapa: Arawa Chieftainess (1911), on at least five occasions. Also seen here is another of his regular sitters, first painted in 1902 and entitled Te Aho o te Rangi Wharepu: A Waikato Warrior, Ngati Mahuta Tribe (1939).

The innate character of New Zealand landforms has long been a focus for Michael Smither, and his distinctive and sinuous stylisations may owe something to his boyhood fascination with the French curves used by his father, a graphic designer.

The younger Smither grew up in New Plymouth, under the influence of Taranaki /Mt Egmont, and for the last 20 years has been based at Otama Beach, Coromandel. From here he can follow ‘squalls of light and rain’ moving across the peninsula, observing landforms that describe the passing of both time and weather, as captured in Coromandel View I and Coromandel View II. By so doing Smither believes he is discovering his ‘own set’ of French curves.

Justin Boroughs’ Karaka Trees and Rangitoto from One Tree Hill presents a pristine Auckland landscape, and while no people are evident there is evidence of their presence – both Maori and Pakeha.

It is the sky rather than the land that dominates in Grahame Sydney’s meticulously executed watercolours, in which time appears arrested. In Moon & Bull a lone and silhouetted bovine contemplates the end of another day, and in Motor Camp, Tauranga Bay, Northland, the viewer’s eye is drawn to a solitary caravan and then offshore to an island bathed in the golden glow of a setting sun.

The cultivated landscape is represented here by August, one of Karl Maughan’s large-scale signature slices of lush blooms, energetically painted and inviting more than just visual engagement. Northern Cloud is typical of the urban constructions associated with Sir Peter Siddell (1935-2011), and recognisably Auckland with its wooden villas and volcanic cones but with streets strangely free of traffic and other signs of modern technology. While this vision is very much about the impact of European settlement, the earthworks visible in the background are a reminder that this land was settled long before the appearance of Cook, or even Tasman. In sharp contrast, George Baloghy revels in all that the urban environment has to offer. His Anglesea Street, viewed from the shady side of Ponsonby Road, presents the weatherboarded shopping strip against a backdrop of downtown, Rangitoto and a glimpse of the Waitemata, while striding pedestrians, traffic, road markings and signage are all suitable subjects for inclusion.

Prior to human settlement New Zealand was a land of birds. The wildlife here is dominated by some 245 species, including more flightless species than any other place on earth. This rich avian fauna was magnificently recorded by Sir Walter Buller in his A History of the Birds of New Zealand, published in London in 1873 and using illustrations painted from museum specimens by Dutch artist J.G. Keulemans. One such image was the inspiration for Layla Walter’s cast glass Keulemans’ Tui, which also includes a second bird drawn from an image by New Zealand photographer Geoff Moon. It is the kereru, or wood pigeon, that is the object of interest in John McLean’s richly rendered Springheel Jack Birdwatching. Based on an eccentric character and renowned naturalist from the artist’s boyhood in Tauranga, the shirtless and pinstripe-suited Springheel Jack is seen observing his subjects in the canopy of a puriri tree.

Ray Ching established his international reputation as painter of birds, from New Zealand and Britain, and has recently returned to this country’s fauna and given it an Aesopian twist.His Crab in the Paddock concerns a crustacean who decided to relocate from the seashore to a lush green pasture, where he was conspicuous and spotted by a hungry egret. The moral of the story is: ‘be content with your lot’, for the crab’s inevitable fate was watched by members of this country’s 32-million strong flock of sheep.

The earliest European included in this representation of ‘our people’ is the old sea dog in Liam Barr’s No Man’s Land, who has come to grief on a hostile shore somewhere in New Zealand. Based on a poem by E.M. Forster, the subject maintains dignity in the face of adversity and has, pirate-like, a protective kea on his shoulder. Tough types and men of the land were also the preferred subjects of Garth Tapper (1927-1999), recognised in the mid-1960s as one of New Zealand’s leading portrait painters. His cast of characters included habitués of public bars – the subject of his sixth one-man exhibition in 1967 – and the gumdiggers of Northland. Three such hardy and impressively-moustached individuals are the likely subjects of his In the Pub, Puhoi.

Another artist who has long been committed to analysing the New Zealand male, in particular his impact on the landscape, is Nigel Brown. His archetypal black-singleted Kiwi bloke first appeared in the 1970s, dealing to the bush and oblivious to conservation issues, but has since moved with the times to become environmentally and socially aware. In the large Ordinary Bloke, from the recent ‘Provocation’ series, the subject is flanked by Brown’s distinctive tree fern, kiwi and dog, and surrounded by concentric ribbons of text drawn from such sources as the artist’s own recall, the national vernacular and the internet. The smaller painting, A Kind Woman, carries the message ‘Some emotion some / bird on the wing / a world for a kind man / a kind woman’, while Brown’s plea for care and consideration is reinforced by his muscle-bound subject nurturing a kereru.

Providing a natural balance to the concept of the man on the land is Terry Stringer’s interpretation of Katherine Mansfield (1888-1923), the most internationally acclaimed of all New Zealand writers. In this bronze portrait sculpture, based on a photograph taken by English aristocrat and influential arts patron Lady Ottoline Morrell, the face is presented as a looming mask, disproportionately large compared to the rest of the body. This emphasises the imagination of the subject, while the sculptor’s characteristic use of elements that change according to the viewer’s angle suggests the short-story writer’s manipulation of her characters. 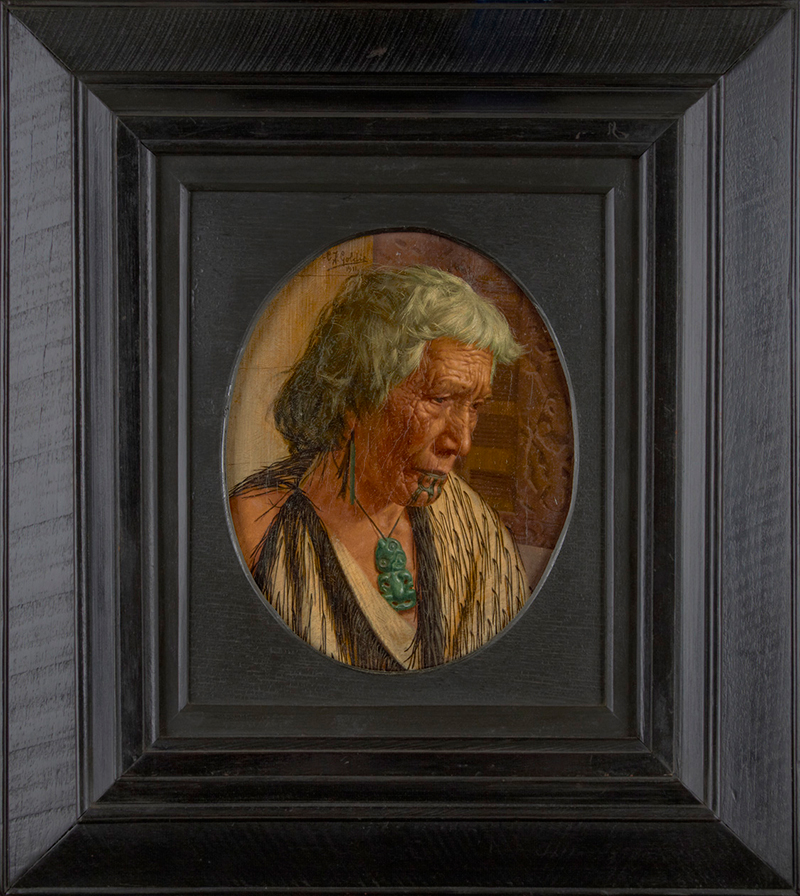