“To paint is to start on a journey of discovery. As such he is always a voyager into the unknown, one who rides from the periphery towards the centre. The lands he explores may vary according to their nature and to his intention. An explorer of light for instance, is a metaphysical adventurer into the blue.”

– Patrick Hayman (‘A Painter’s Notes’ in Painter and Sculptor) 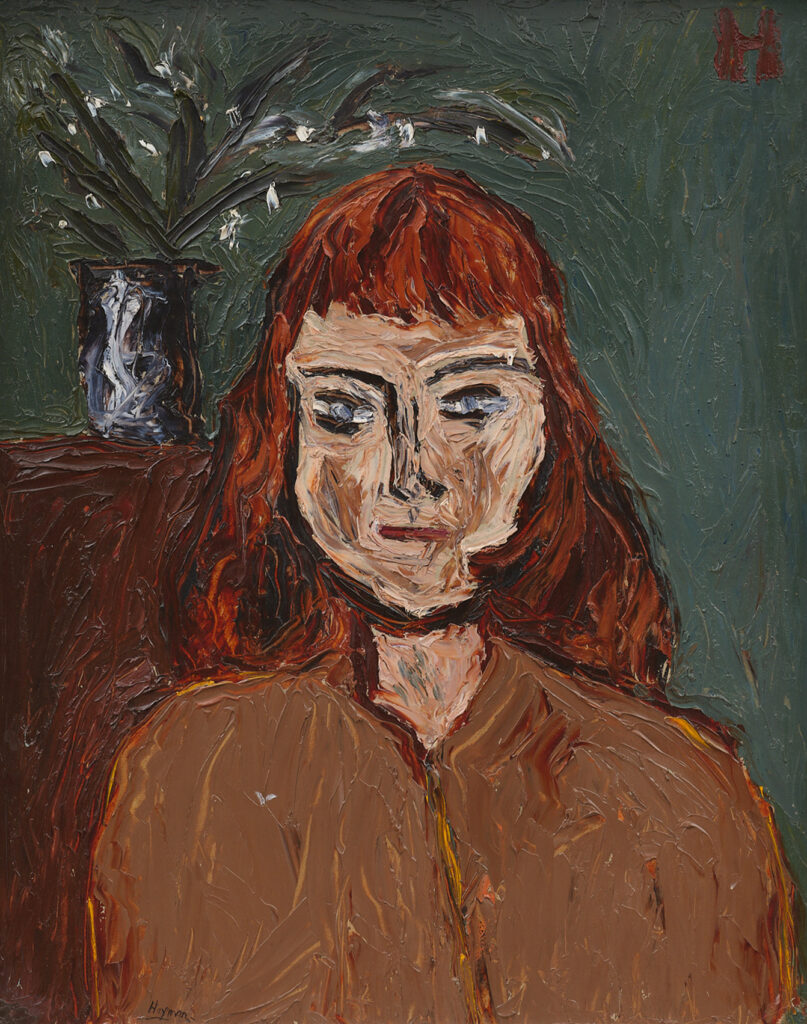 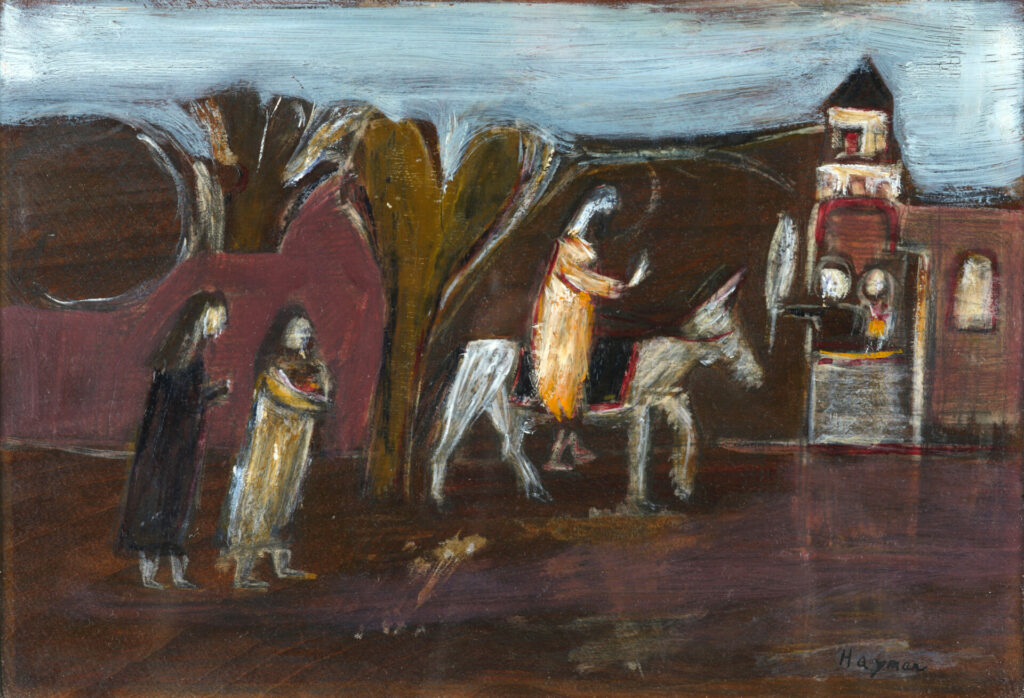 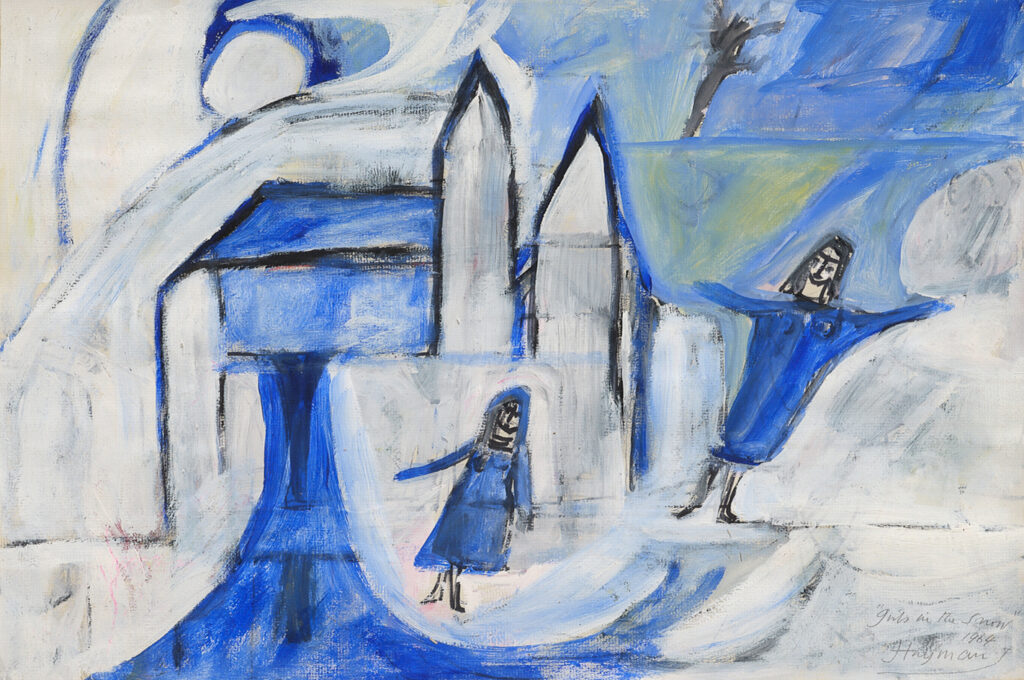 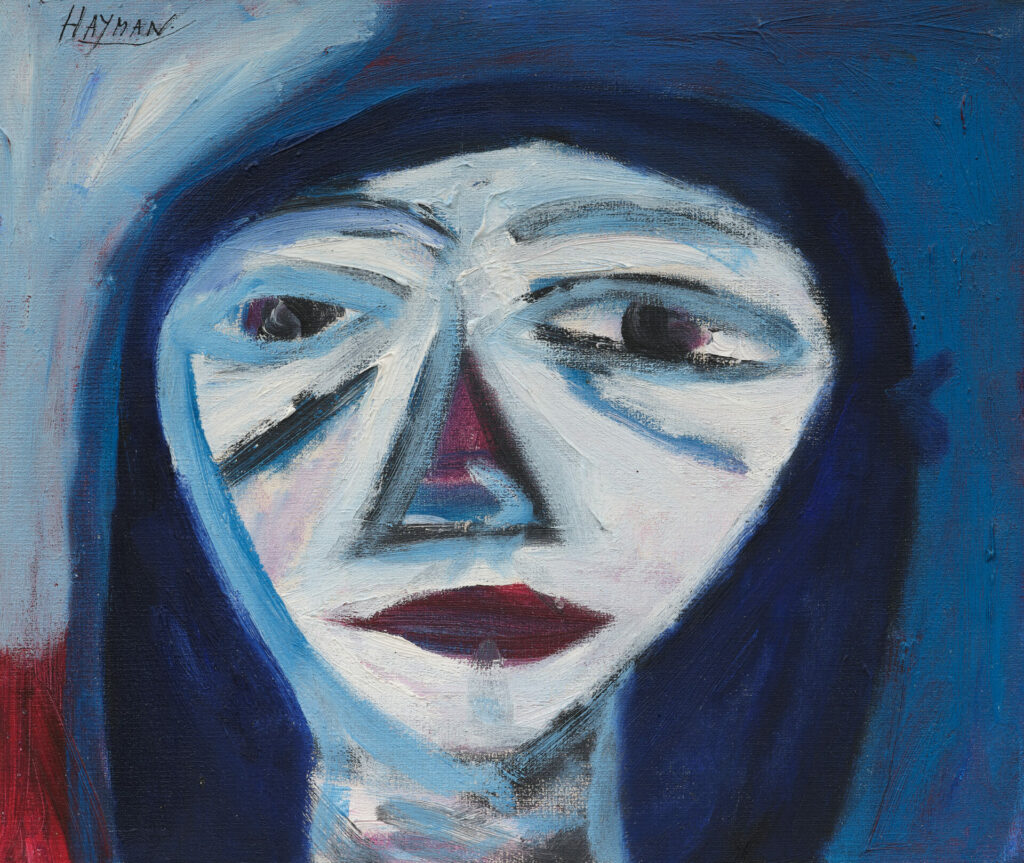 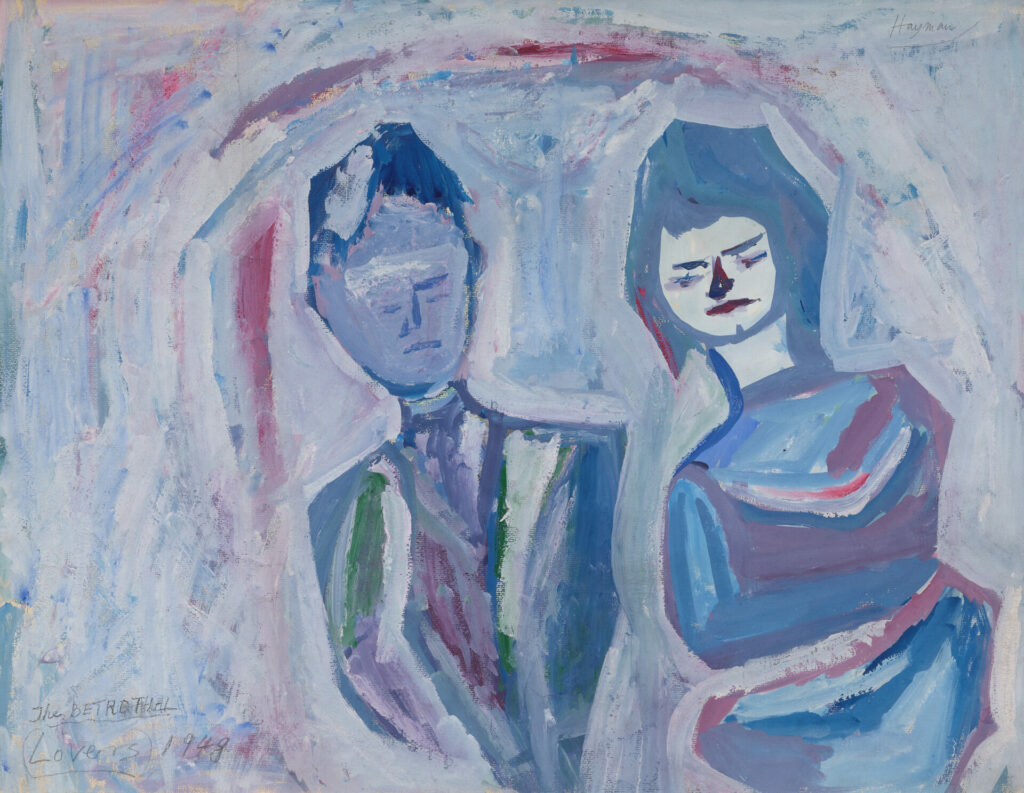 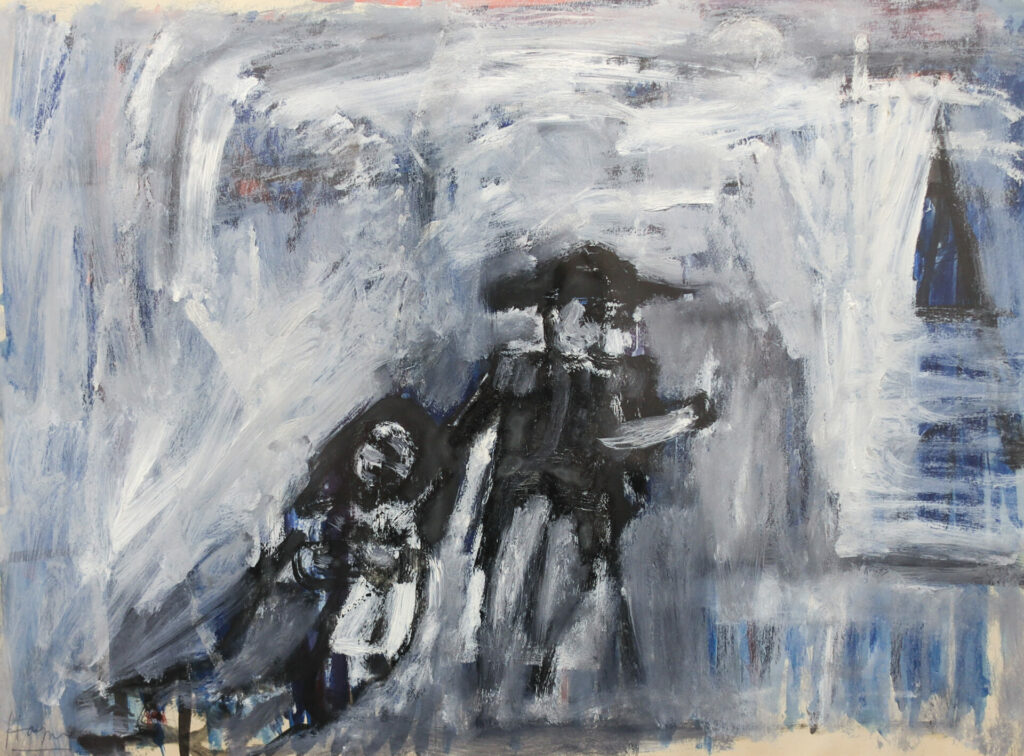 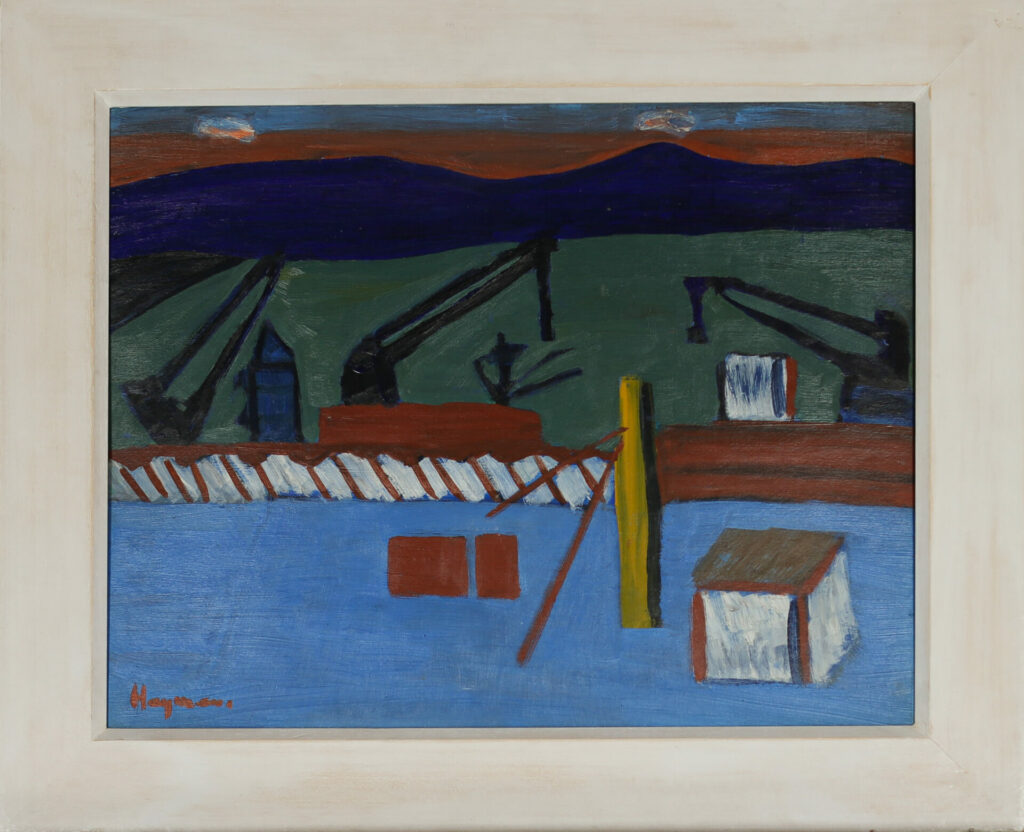 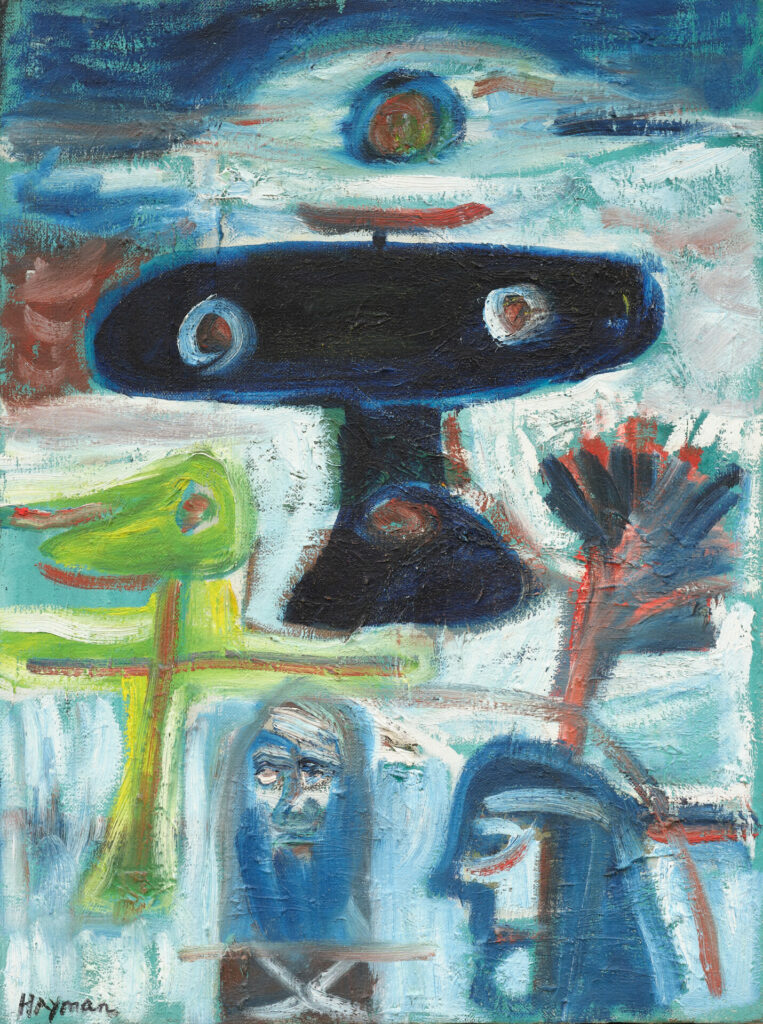 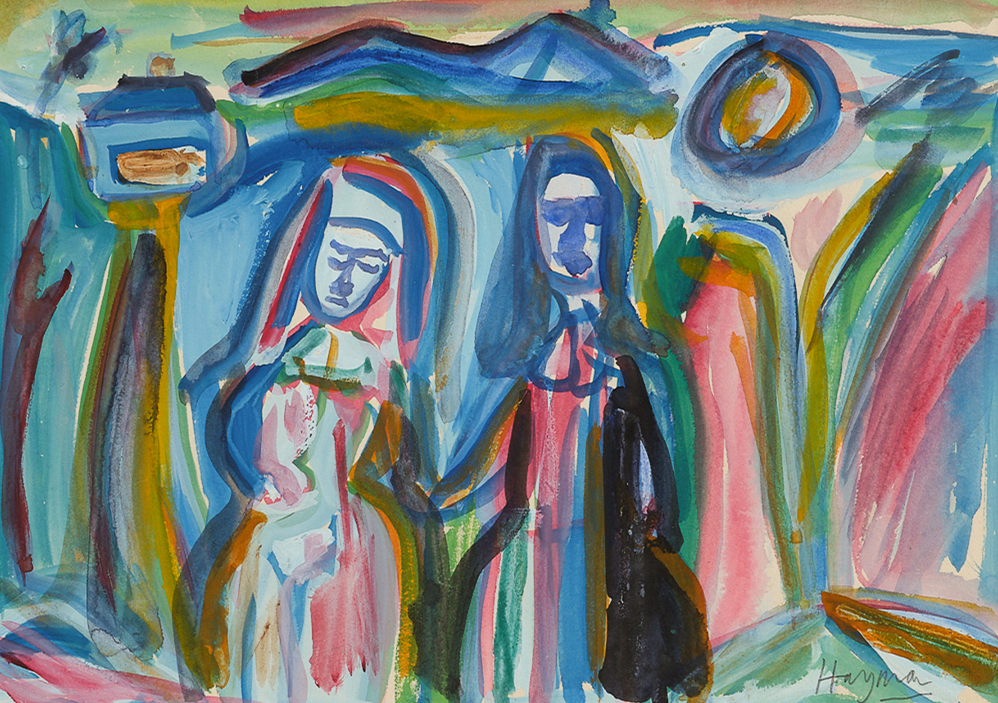 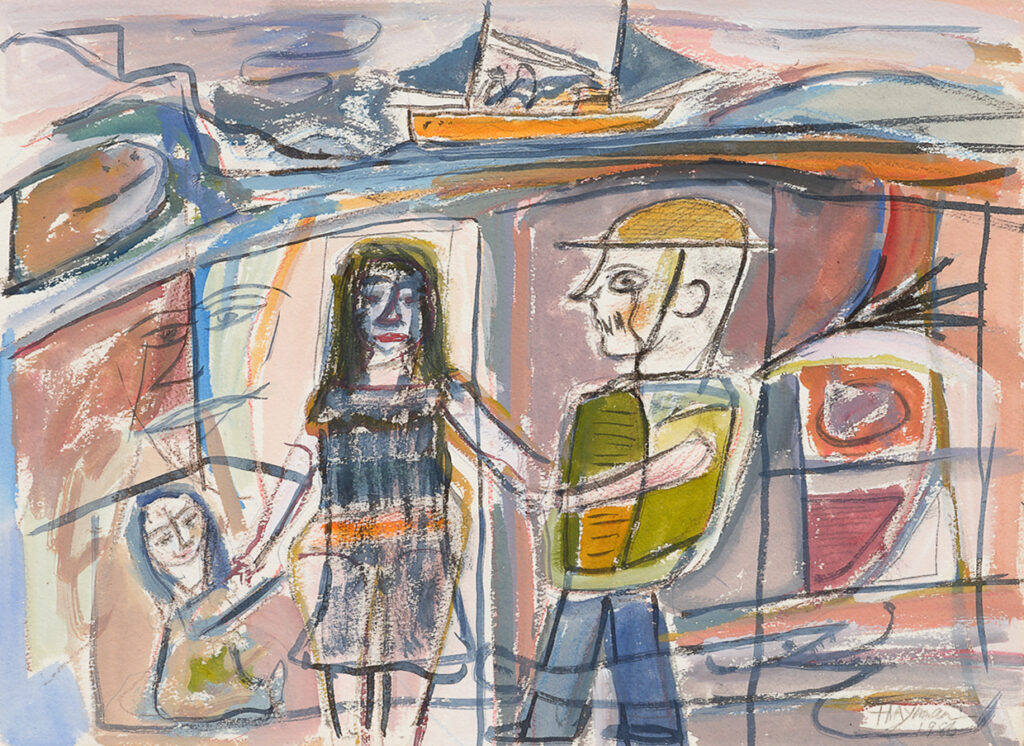 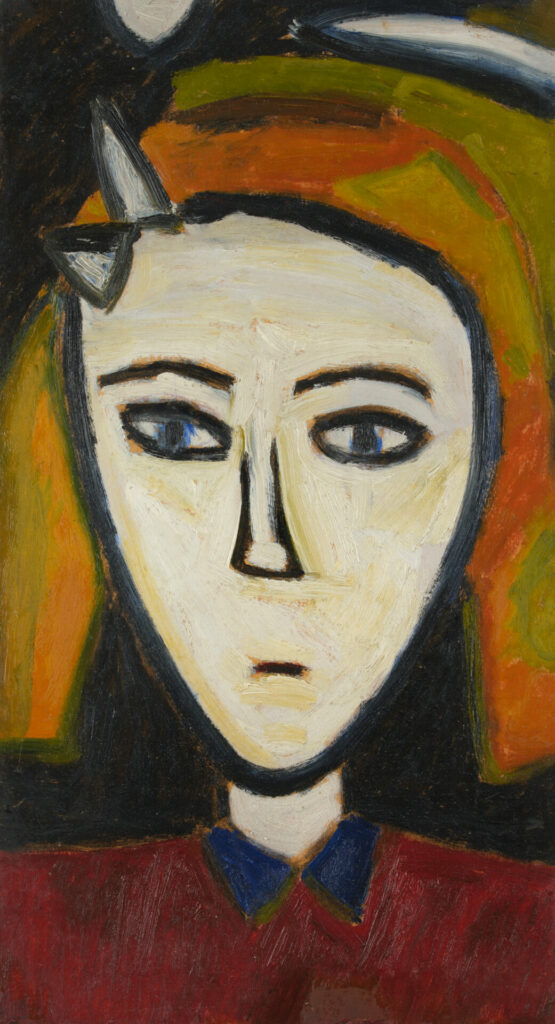 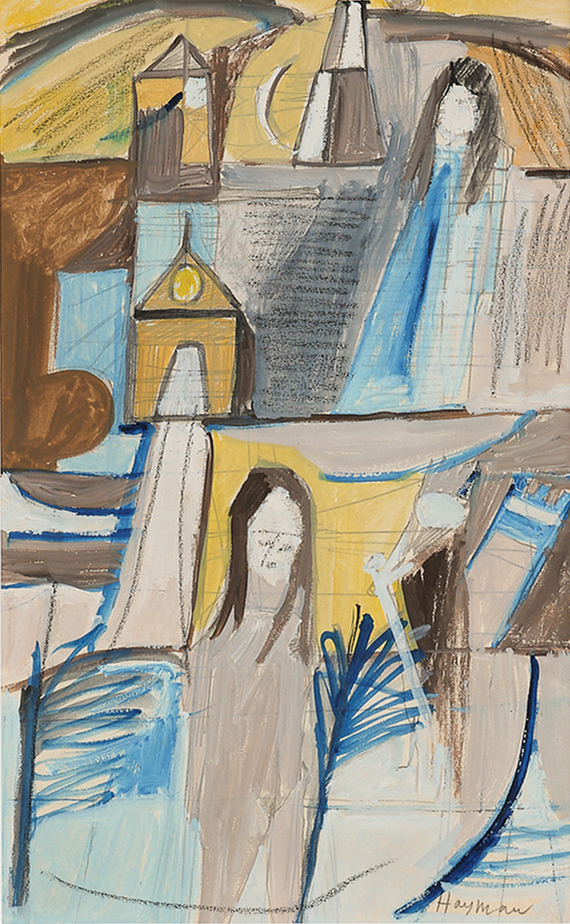 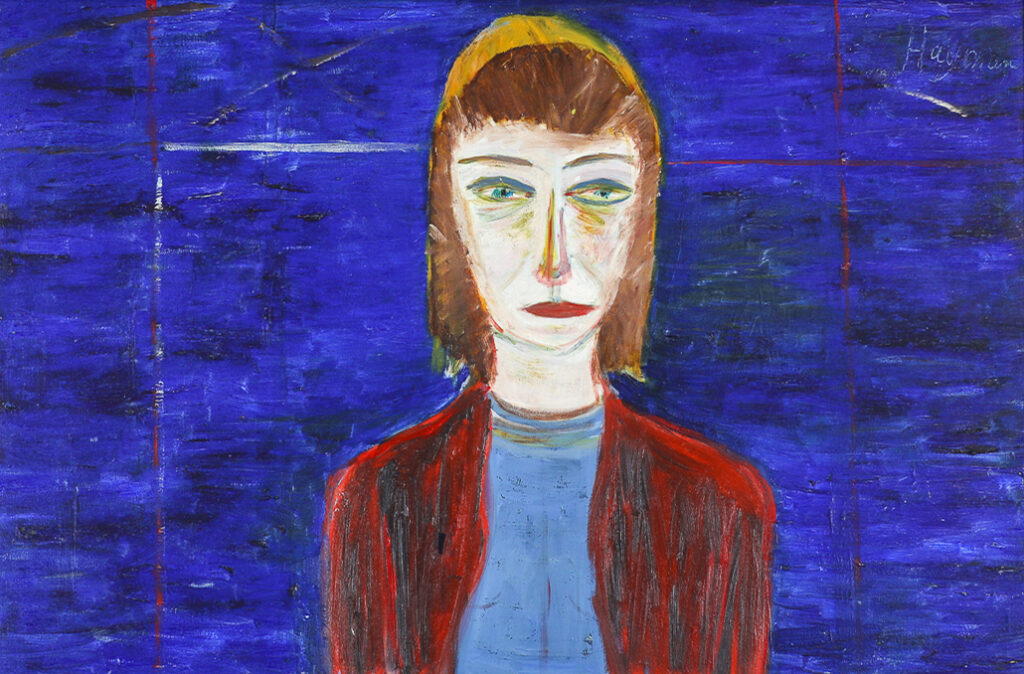 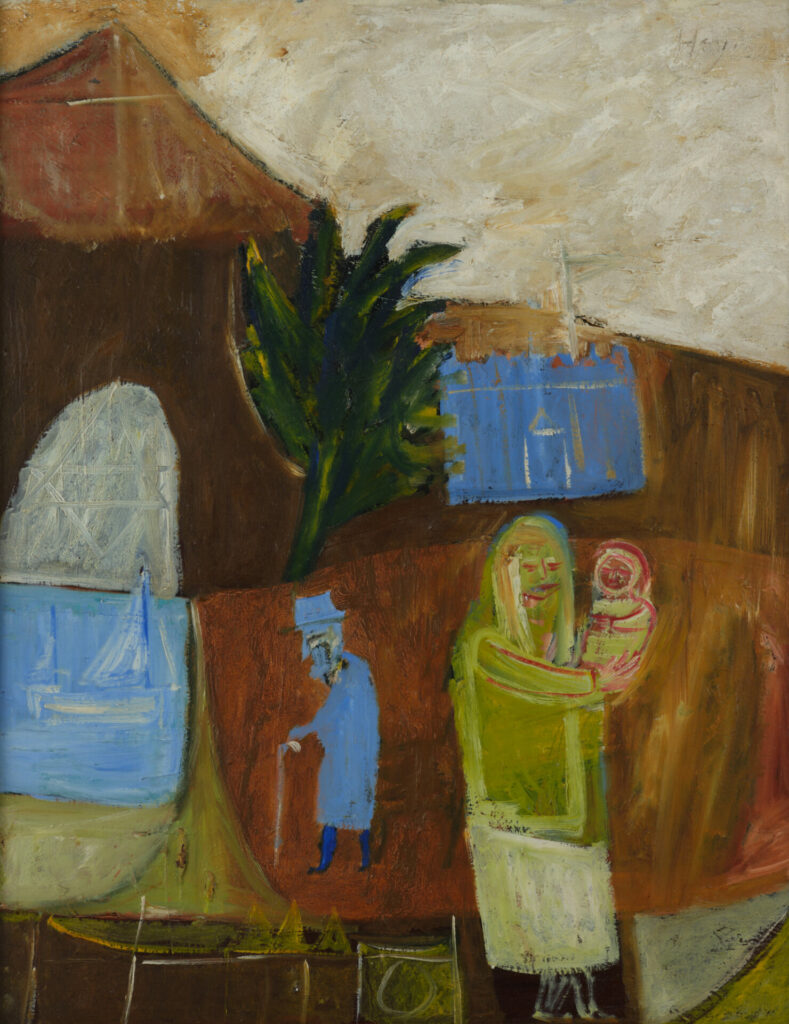 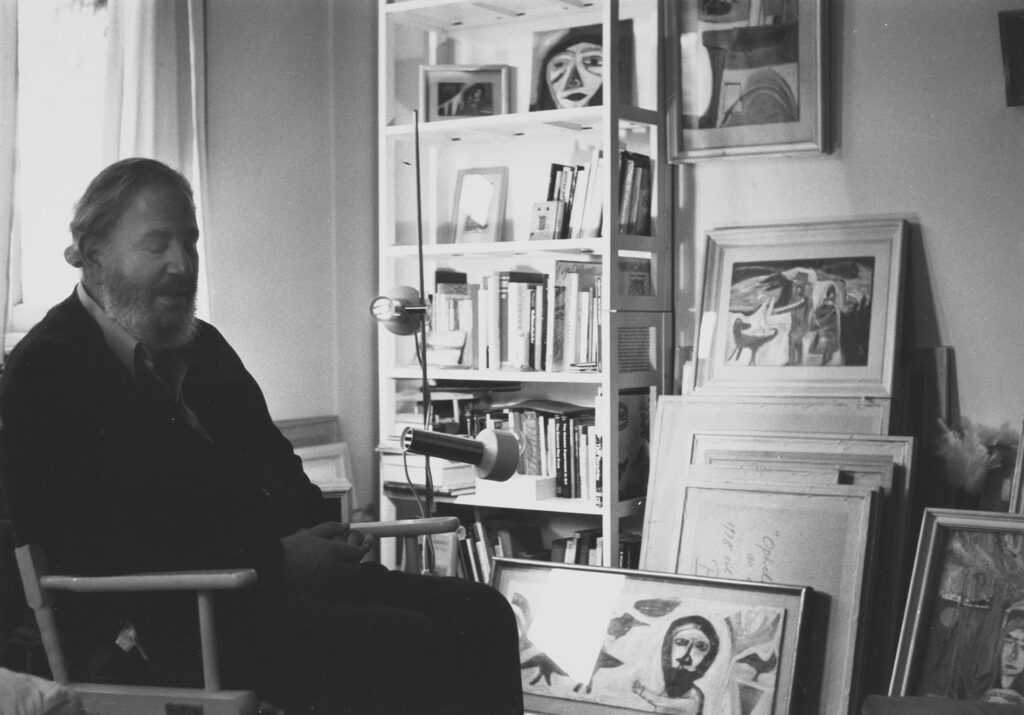 Patrick Hayman, born in London 1915, was a notable painter and poet recognized for his highly original and imaginative works. His style was sophisticated, often small in scale and heavily informed by his personal view of history as well as his love of poetry. Although his imagery is pared back and frequently includes text, he remained a figurative rather than an abstract artist throughout his life.

Hayman spent his teenage years attending Malvern College in Worcestershire. In 1936 at the age of 19, after the premature death of his mother, he journeyed to New Zealand on the S.S. Rangitiki to join his father’s importing firm P. Hayman and Company. Hayman was instantly inspired by his new surroundings, in particular the artistic heart of Dunedin. He made friends with Colin McCahon, Anne Hamblett, Doris Lusk, Rodney Kennedy, Charles Brasch and Ron O’Reilly. He soon became disillusioned with work at the importing firm so he enrolled in a part time course at Dunedin School of Art. Hayman had always considered himself more of a writer than a painter but now able to embark on a journey of artistic discovery he entered the most liberating time of his life.

Hayman was Jewish, a faith that comes with a long and deep history of misplacement, persecution, community, and individual resourcefulness all of which are inherent in his work. During his years of public schooling in England he often experienced anti-Semitism. Accompanied by the threat of WW2 in Europe, relocation to NZ was a welcome prospect.

Religious iconography is a recurring theme throughout his work. Images of crucifixions, biblical characters and the Star of David often feature in his paintings. ‘The Holy Family’ for example includes a cloaked gentleman in a top hat with a sharp side profile alluding to a stereotypical Jewish persona. This figure might be an alter ego or simply an acknowledgment of his lineage. The Star of David is engraved into the paint, almost hidden beneath the details. The diaspora of Jewish people and Hayman’s own life journey is perhaps echoed in the constant movement he creates by using very fluid brush strokes with skewed perspectives.Hayman’s experience as an outsider both as a Jewish man and an immigrant in New Zealand shaped his inclination to stray from conventional art trends and follow his own style.

After three years of study Hayman left Dunedin in 1939 and joined McCahon, Lusk, Kennedy and Elespie Forsyth at the brick house of Toss Woollaston in Māpua. They drew, painted, and worked long hours on an orchard. Hayman viewed his time here as, “A kind of visionary state without knowing it at all.’’ Colin McCahon wrote home about this summer spent with a house full of friends in an idyllic landscape. “I have been working very hard drawing the Mapua landscape but as yet have done nothing really satisfactory. We draw in the mornings and evenings & eat at midday. It is so hot.’’

In 1940, following a brief period in Nelson, Hayman moved to Wellington to attend Victoria University. It was here he mixed with a variety of English and History students such as Hubert and Noel Witheford, Janet Paul and Eric Schwimmer. Hayman settled into a bedsit overlooking the Wellington harbour. He was enchanted with the seascape busy with large ships. As a child his mother took him to Bexhill, where they lived happily on the coast while his father was away at war. The coast left a lasting impression on his young memory and became an enduring motif in his painting. He admired Cornish artist Alfred Wallis whose naïve paintings of ships and the sea he found captivating and a strong influence for Hayman over his career.

In 1942 during his time in Wellington, he had a brief affair and a daughter Christina Conrad was born. Conrad went on to pursue an artistic career as a painter, poet and filmmaker in New Zealand. She was unaware of who her father was and upon the discovery of his identity, Hayman became a central figure within her work. In a poem named ‘father’ she wrote of the estranged Hayman, ‘’father, you came too late, a mound of anger had grown, over heart’s divided chamber.’’ Conrad’s daughter, Miro Bilbrough, also went on to pursue an artistic career referencing Hayman in her memoir. ‘’It occurs to me that his painting, which often include poems or literary fragments, might have been gardens to him. I sometimes think of this when I am writing that I am making a garden to roam in.”

In 1945, Hayman was trusted by McCahon to select and hang paintings for his exhibition at The French Maid in Lambton Quay, Wellington. McCahon wrote to his sister, Beatrice, stating, “Last weekend I spent in Wellington to see the exhibition. Very beautifully hung by Pat Hayman”.

Hayman was also invited to McCahon’s wedding to Anne Hamblett, and gave the artist a copy of Professor Charles Andrew Cotton’s ‘Geomorphology of New Zealand’, a book that had a great influence on McCahon’s art. This gift represented the empathy Hayman felt for McCahon’s struggle to understand the structures underlying the landscape and apply it truthfully to his work.

In 1947 Hayman returned to England on the SS Port Jackson and became deeply involved with the St Ives art community. The quintessential style of his work was already established, and it was further encouraged in this environment which twenty years previously had nurtured the untutored vision of Alfred Wallis. Hayman found inspiration from both the seascape which reminded him fondly of New Zealand and from other artists living in the colony.

The British artist, Christopher Wood shared the same admiration for Wallis’ work which drew him to the Cornish seaside. Wood was held in high regard by Hayman as he believed his work had a real feeling for colour, life and originality. Hayman’s work garnered admiration from notable artists such as Barbara Hepworth and Peter Lanyon. In 1952, Barbara Hepworth wrote to Patrick Hayman; “There are so many of your paintings that I would love to have…”. It was at Hepworth’s request that in 1964, Hayman became an honorary member of the Penwith Society of Arts in Cornwall.

The magic of the sea and boats was equalled by his fascination with flight and the sky. Well known St Ives artist Peter Lanyon became a close friend and mentor to Patrick when the Hayman’s settled in St Ives. Lanyon was an avid glider pilot and this took his art into a totally new sphere of viewing and experiencing his native land. Before his death in a gliding accident, Hayman and Lanyon talked of the revelation of another world able to be transferred to canvas. This sensation of levitation fuelled their imaginations. The appearance of an aircraft in Hayman’s work was recurring and reinforced the idea that he felt part of a world created in his own dreams.

In 1949, Hayman met Barbara Judson who lived above him in a tiny studio at Kensington Church Street. They had a whirlwind romance and by 1950 were married, living together in Carbis Bay very near to St Ives. Throughout the 1950s they travelled back and forth from London to Cornwall. In 1954 Hayman’s first solo exhibition was held at Gallery One in London. This was the first of many exhibitions in London over the next 30 years which established his undisputed reputation in the British art scene. In 1965, the couple returned to Barnes where they had kept a home since 1960. It was in Barnes that Hayman founded The Painter and Sculptor magazine, a quarterly publication that highlighted humanistic figurative art. That same year ‘Self Portrait as a Flying Machine’,  was painted as a valedictory work on the accidental death of Peter Lanyon. It represented a salute to their shared conviction in their own ability to rise above the quotidian into a spiritual space, another sphere of consciousness exclusive to but a few.

Another portrayal of himself named, ‘Self Portrait’ was acquired by collector Ruth Borchard to be included in an extensive exhibition of portraits in 1965. In a letter to Borchard, Hayman stated: “I would be delighted to let you have a self-portrait for 20 guineas…I think your idea is a charming one & that a collection of contemporary self-portraits will be extremely valuable.” Throughout the 1960s and 1970s, Borchard collected 100 self-portraits from British artists. During this time, Hayman taught at the Falmouth School of Art and then at Croydon School of Art up until he had a heart attack in 1970, forcing him to slow down and take special care of his health.

The same year as his death, 1988, ‘Painted Poems’, a book by Patrick Hayman was published by Louise Hallett Gallery. His innovative work continued to inspire others after his death. A large retrospective exhibition was held at Camden Arts Centre in 1990. Another exhibition was held at Belgrave Gallery in 2005, simultaneously launching the publication Patrick Hayman – Visual Artist by Mel Gooding.

ENQUIRE ABOUT A WORK

ENQUIRE ABOUT A WORK
MORE ABOUT ARTIST