VIEW THE EXHIBITION
ABOUT THE ARTIST

Peter McIntyre is one of New Zealand’s most renowned artists, due to the ever popular presence of his books in the libraries of New Zealand families.

McIntyre grew up in a creative environment in Dunedin, with his artistic pursuits avidly supported by his artist father, who signed him up for painting lessons under Dunedin artist Alfred O’Keeffe. After noticing his son’s lack of interest in a Bachelor of Arts at the University of Otago, McIntyre’s father encouraged him to study art at the Slade School of Art in London. Whilst at the Slade, McIntyre thrived from the study of old masters, such as Raphael and Ingres, and received several prizes in drawing and composition during his final year.

Following the completion of his studies, McIntyre worked as a commercial artist in Britain and became heavily influenced by the European avant-garde movements that developed in the 1930s, particularly Cubism. When war broke out in 1939, McIntyre enlisted as a gunner with the 34th Anti-tank Battery, a New Zealand volunteer unit formed in London. Sent to Egypt with his platoon, McIntyre was soon contributing illustrations to the British war magazine Parade. 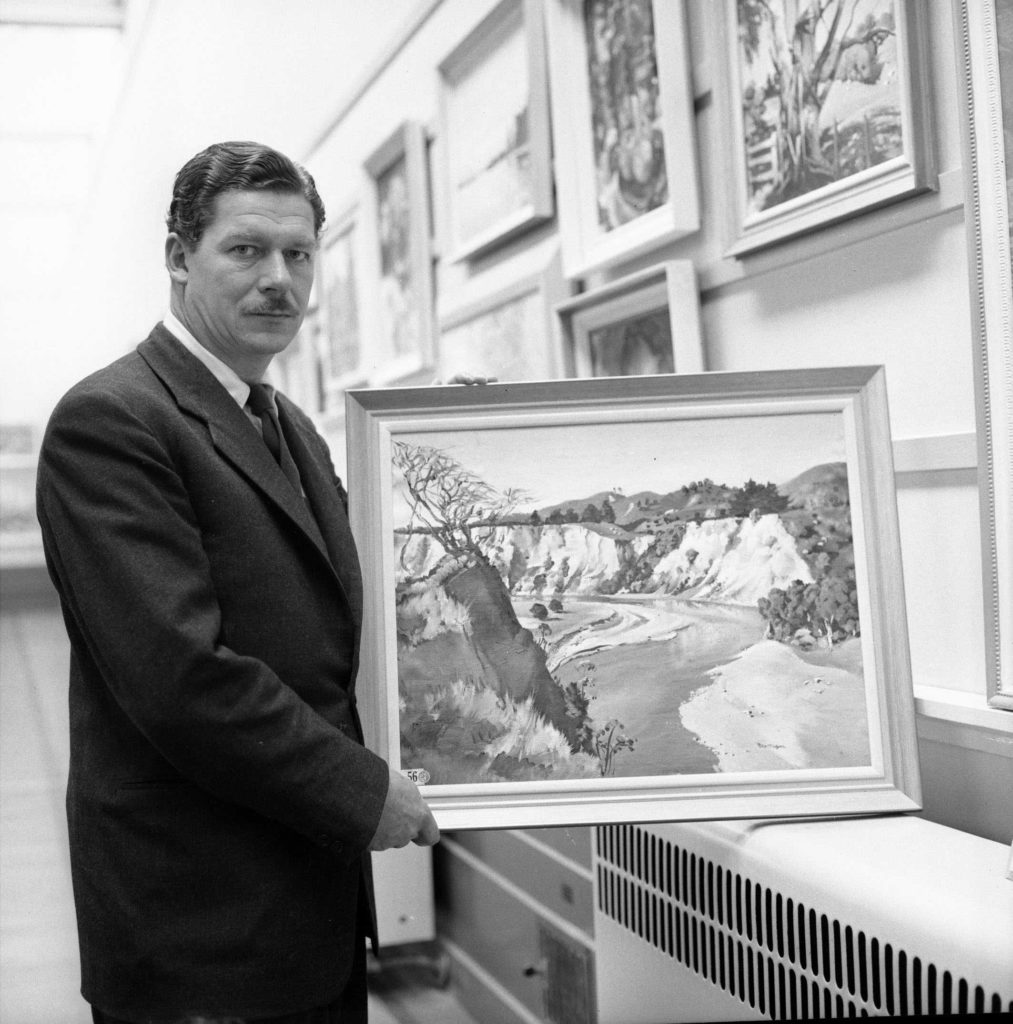 In January 1941, General Freyberg learned of McIntyre’s painting talent and duly appointed him New Zealand’s official war artist, chronicling the activities of 2ndNZEF throughout Europe and North Africa. These images became a frequent presence in magazines such as Illustrated London News and the New Zealand Listener, causing McIntyre’s paintings to quintessentially represent the experiences of New Zealand soldiers in the Second World War. These works documented the campaigns of ANZAC troops in Crete, North Africa, Tripoli and Italy, and are now held at the National Archives in Wellington.

McIntyre returned to New Zealand in February 1946 as a respected and established artist, setting up a studio in Dunedin to quickly become a renowned portrait and landscape painter. His artworks from the war had toured both during and after the Second World War, causing McIntyre to become a familiar face in the press and on television.

Despite the financial difficulties experienced by full-time artists in New Zealand, McIntyre’s friendship with then-Governor General Freyberg provided him with valuable support as well as substantial patronage. McIntyre also served on the council of the New Zealand Academy of Fine Arts from 1959 until 1964, during which time he won numerous national art competitions; the Kelliher Art Award (1959); the watercolour section of the National Bank Art Awards (1960); as well as the Hay’s Art Competition (1962).

Following these successes, McIntyre began writing and illustrating books between 1962 and 1981, beginning with an illustrated biography entitled The Painted Years in 1962. His book Peter McIntyre’s New Zealand was released in 1964 and was so popular that it sold out within six days. McIntyre undertook numerous trips around the globe including Antarctica, Hong Kong, the Pacific, and the American West, writing and illustrating books documenting his experiences.

McIntyre became a particularly popular painter in the United States in 1971 following the release of West. His ability to capture the spirit and atmosphere of a scene and infuse peopleless scenes with anthropomorphic character, caused his paintings to be highly sought after.

McIntyre’s contribution to New Zealand art history was recognised in December 1970 with an OBE for his work as an author and for his accomplishment in the fine art fields. A retrospective show of McIntyre’s war paintings was held at the Wellington City Gallery in 1995 to popular acclaim. His work is held in numerous private and public collections, including those of the National Army Museum in Waiouru, Te Papa, and the Auckland War Memorial Museum, however it is McIntyre’s paintings of New Zealand cities and landscape which continue to make him one of the most recognisable and respected New Zealand artists of the twentieth century.

“It was here that I learned to fish for trout, riding a horse away up the Lindis River, only to break my heart when, on the first occasion, a big fish that I had played for half an hour broke my cast and took the only two flies that I possessed. Here, too, I learned to shoot, being employed one summer when I was fourteen to shoot deer on a sheep station in the Lindis Pass. I was paid a shilling for every deer tail that I brought in and climbed the tussock hills all day, the same velvety hills that in later years I loved to paint. It was a magnificent landscape to paint with its rich golds and browns.” 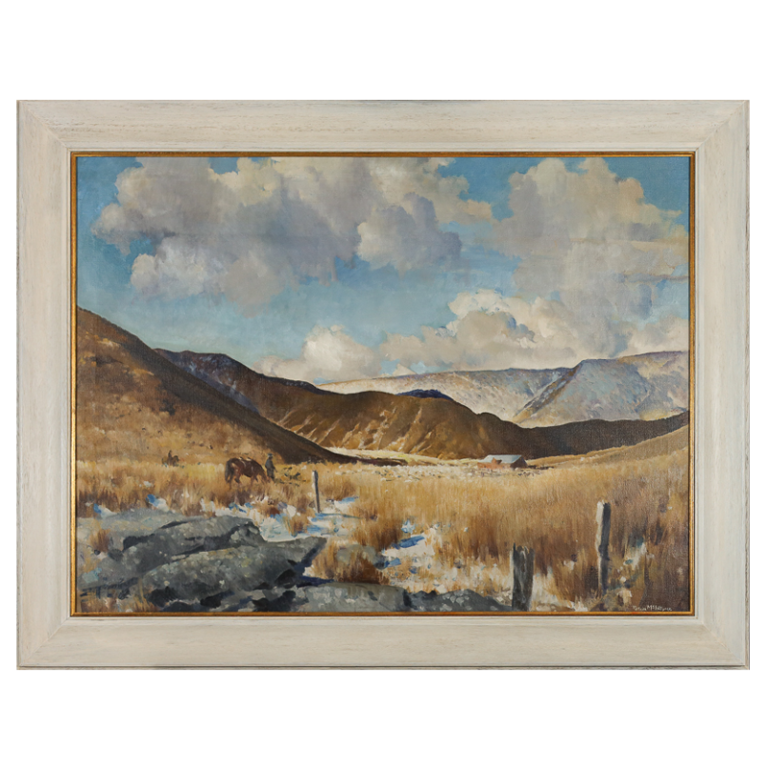 “I spent the holidays of my boyhood along this windswept coast and in all the years it is one of the few things that have not changed. As I made this drawing the ghosts of long ago walked past and the years were heavy on me; but this was the place where I first met my Pacific. ”

“I am a New Zealander. That is not just my nationality; it is, I admit, a state of mind. I am so absorbed in this country that being a New Zealander has become a sort of profession for me. For much of the time it fills my days and demands my time…. I mean I paint the place; I write about it; I fight for the preservation of its countryside. I am happiest by its lakes and rivers. I am besotted by it.” 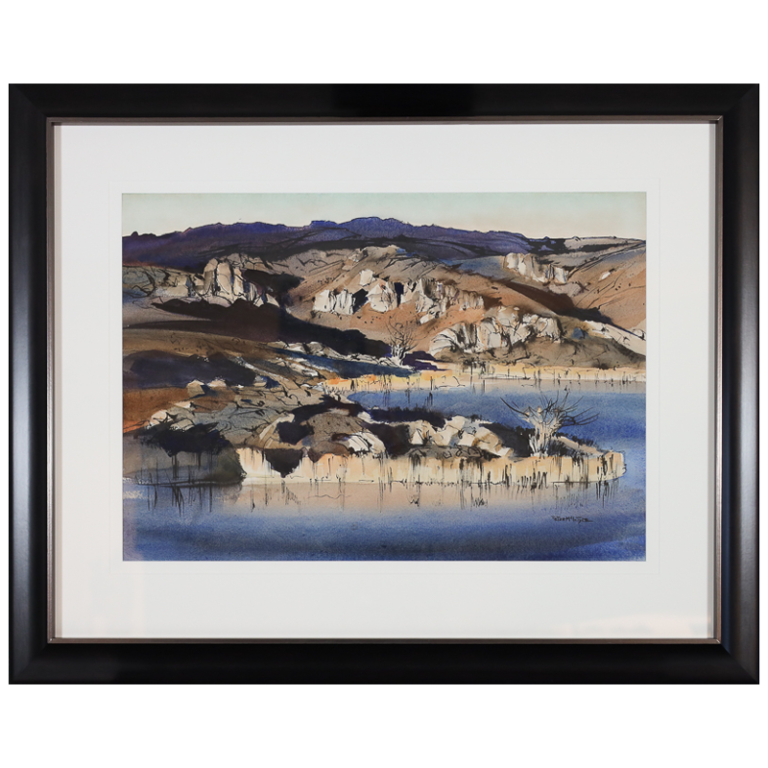 “ For years its white cliffs and its green water have been my favourite subject and I have explored every stretch of it, watching the light on the cliffs change and shadows define new shapes.” 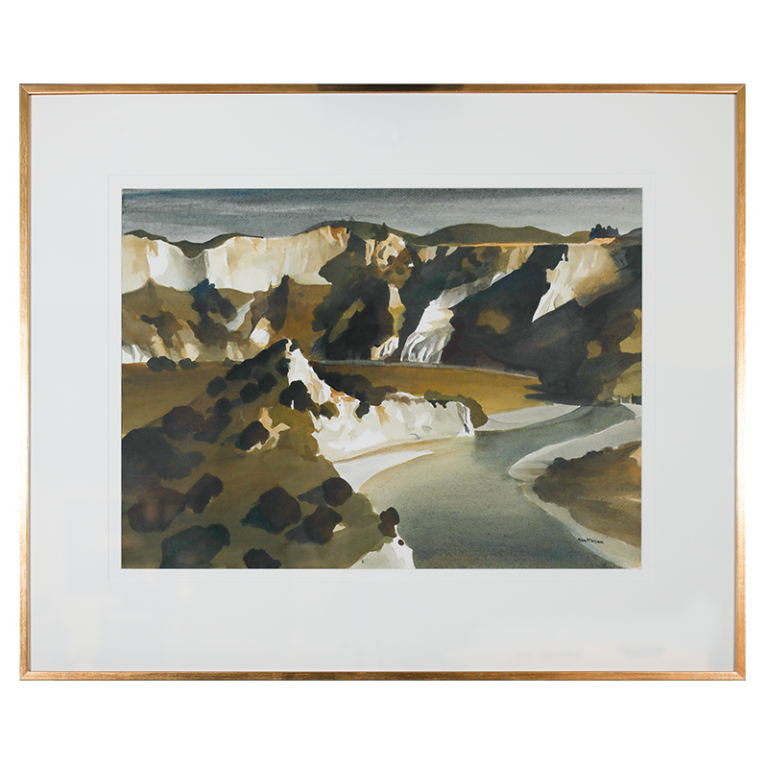 “If I didn't have my cottage on my trout stream in New Zealand, in all the world, Taos, New Mexico, is where I would like to live.” 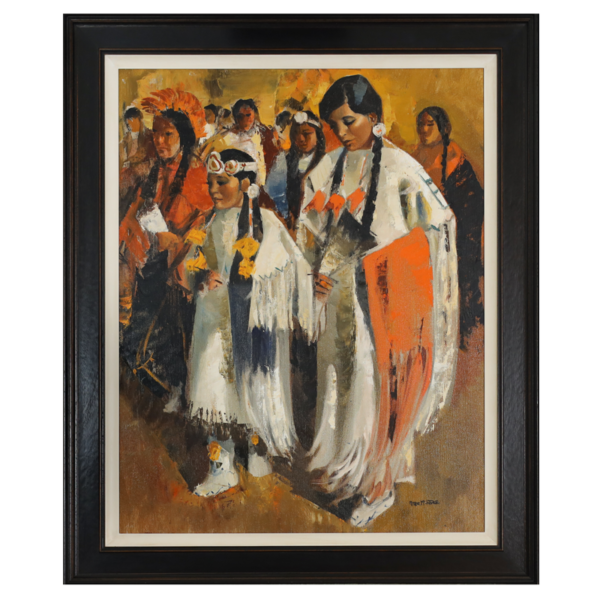 “Colorado is always beautiful, but in fall there is a soft loveliness as the riot of gold and yellow changes to deep greys and clear whites.”

“The Desert Road crosses a comparatively small area but it is one of those parts of New Zealand that has a face and presence all its own. Only a mile from the road I have watched the evening light whilst the trout rose on the small stream below me and a deer, head up and watchful, came out of the beech forest to drink at a pool.” 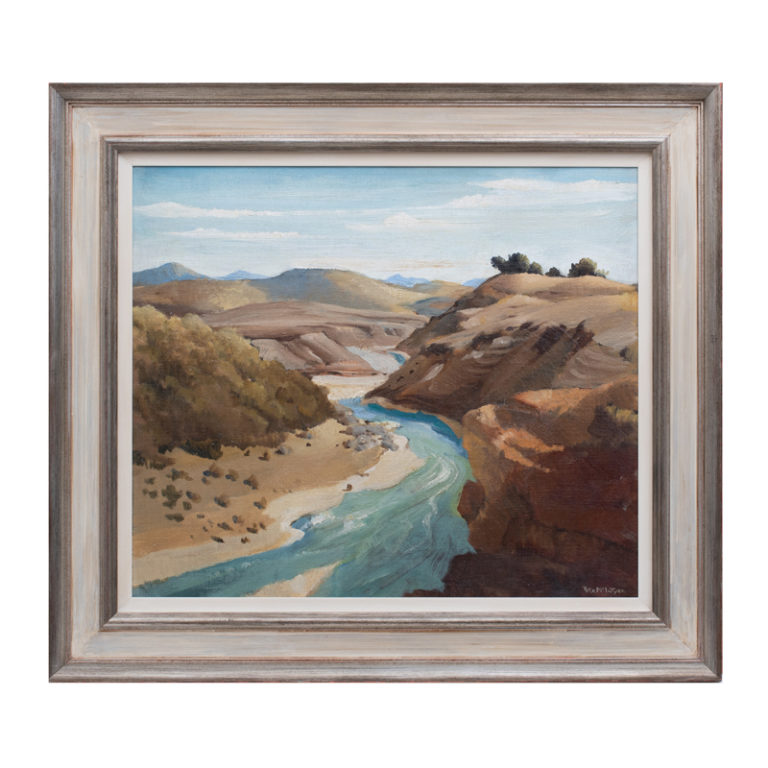