Peter McIntyre was born in Dunedin in 1910. The son of a painter and graphic artist, McIntyre rose to become one of New Zealand’s most popular and celebrated artists of the mid-twentieth century. His works remain highly sought after for their diversity of subject and their ability to convey the essence of a scene through an array of media.

McIntyre began his artistic career by completing a bachelor of fine arts at the Slade School of Fine Art, London (1931 -1934), after which he worked as a commercial artist in Britain and became heavily influenced by the European avant-garde movements that developed in the 1930s, particularly Cubism. When war broke out in 1939, McIntyre enlisted as a gunner with the 34th Anti-tank Battery, a New Zealand volunteer unit formed in London. Sent to Egypt with his platoon, McIntyre was soon contributing illustrations to the British war magazine Parade. In January 1941 General Freyberg appointed McIntyre as New Zealand’s official war artist. McIntyre went on to chronicle the activities of 2nd NZEF throughout Europe and North Africa.

McIntyre returned to New Zealand in February 1946 as a respected and established artist, setting up a studio in Dunedin where he quickly became a renowned portrait and landscape painter. He soon received numerous commissions; one of the most important of which was a commission by Major Harry Stanley, an ex-Grenadier Guards officer, who asked McIntyre to paint a series of pictures of Hong Kong. In McIntyre’s words Major Harry Stanley, quietly and charmingly promoted Hong Kong.

McIntyre and his wife Patty, were soon immersed in the vivid colours of Hong Kong. Ensconced in his new home on the bush-clad slopes of the Peak, McIntyre wasted no time in capturing the sights and sounds of the city. Looking down on to the harbour and the Nine Dragon Hills, McIntyre painted the high-stern junks sailing out to their fishing grounds. McIntyre was enthralled by the scenes he saw. He wrote; they look still as they looked when Marco Polo saw them. Throughout the night their lanterns, brightly lit to attract the fish, sparkled and twinkled in their hundreds across the sea like a lighted city afloat.

McIntyre revelled in the majesty of Hong Kong. He frequented the Foreign Correspondents Club, luxuriously nestled above the harbour, and visited old acquaintances such as Johnny Dominis, Ed Meagher, Harold Lee and Bob Drummond. It was Bob Drummond who gave McIntyre a real sense of the riches of Hong Kong, when he whisked McIntyre and his wife away on his junk, The Sea Dragon. The party spent the weekend sailing from Aberdeen, out through Lyemon Channel, to Saikon, a large fishing village of white walled houses, an experience McIntyre would never forget.

It was not only the majestic beauty of Hong Kong’s surrounding landscapes that captured McIntyre’s imagination and appreciation, but the people of this bustling city also enthralled him. In his book, The Painted Years (1962), McIntyre wrote, the Chinese women of Hong Kong are a constant delight to the male eye with lovely features, slim figures with straight-backed poise, their cheong sam dresses fitting closely to the figure, slim necks modestly covered but beautiful long legs revealed high up to the thigh. His appreciation and awe stretched to every aspect of Hong Kong society. McIntyre marvelled at the riot of coloured signs and banners in the streets, the bustling throngs of the market places and the luxury that his friends and acquaintances enjoyed. To McIntyre Hong Kong burst open the senses in its opulence and splendour.

To McIntyre, life in Hong Kong was exciting, colourful, luxurious and enthralling, a view expressed in his books and paintings. He wrote of his experience of Hong Kong stating, life in Hong Kong is delightful; there is no more exciting place on earth. 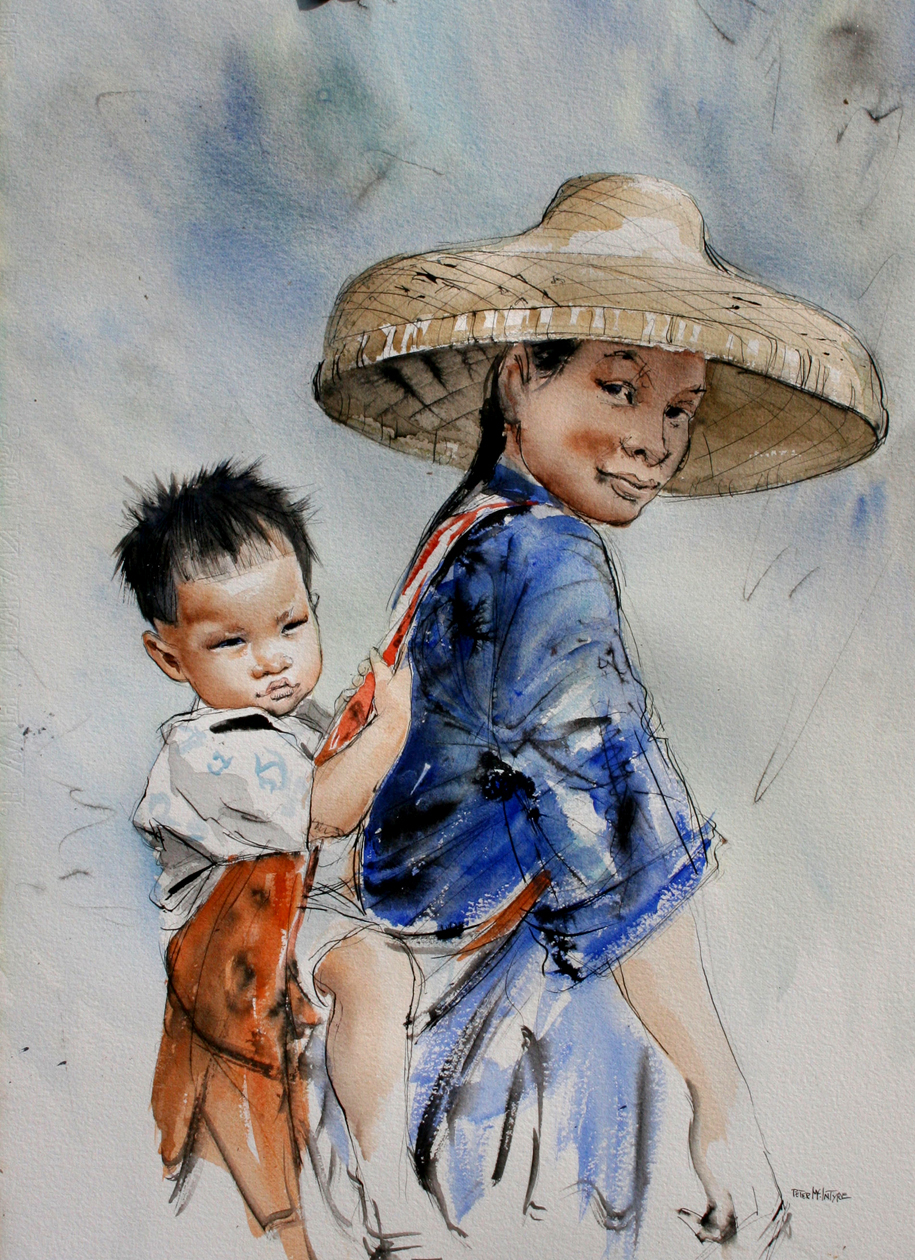