Beatrice Wood (1889 – 1987) was born in Christchurch and educated at Rangiruru Girls’ School, where her interest in painting began. She attended a finishing school in England before returning to art school in Christchurch where her tutors included Sydney Lough Thompson and Margaret Stoddart. Back in England at the outbreak of World War I, Beatrice served as a volunteer ambulance driver at the New Zealand base at Codford on Salisbury Plain. 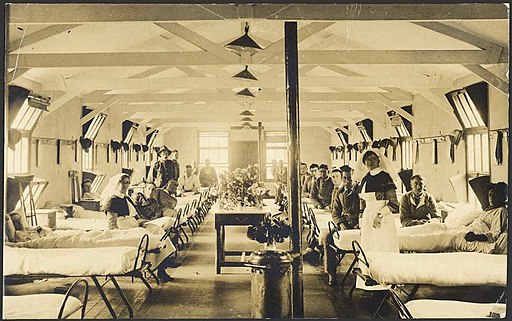 Part of her role included caring for recuperating officers, which indirectly lead to a major turning point in her personal and artistic life. Having contracted measles at Codford she went to St. Ives for a holiday, where she met and befriended Frances Hodgkins.

E. H. McCormick in his book The Expatriate describes their first meeting:

… and there was Miss Beatrice Wood who, one day in the early spring of 1918, ‘blew in’ to the studio at St. Ives, ‘a bright fair haired girl with a fluffy dog in her arms’. She was ‘a masterful young person – of the nice sort’ endowed with a business sense inherited, Frances supposed, from ‘that big family of miller and merchant Woods’ she herself had known as young men when they visited Christchurch in her youth. In her masterful fashion, Miss Wood commissioned a portrait which was completed after three sittings and sent to New Zealand in the care of Sir Joseph Ward.

An enthusiastic gardener, many of her paintings were inspired by the camellias and rhododendrons in her own garden at Wadestown Road, Wellington. From the early 1950’s a New Zealand home was not considered complete without one of Beatrice Seddon’s beautiful floral studies.

Beatrice also enjoyed portraying the New Zealand landscape, particularly the West Coast of the South Island and her childhood home, Canterbury. Her work also caught the eye of many visitors to this country and it is said “that there are now many homes in England, Australia, America and even India that are lovelier for one of her paintings.” Lady Freyberg was one of Mrs Seddon’s most enthusiastic admirers and it was she who was responsible for choosing one of Beatrice’s works to adorn the Royal Suite at Government House when Princess Elizabeth visited in 1952.

In 1971 Beatrice travelled to Norfolk, England to view an exhibition of Flower Paintings of the World where one of her own flower studies had been selected by the National Art Gallery to represent New Zealand.