Peter McIntyre is best known as a landscape artist. His career as one of New Zealand’s leading war artists is one that is shrouded in mystery, myth and adventure. The works completed during his tenure as official war artist are compelling pieces that capture New Zealand’s involvement in the North African campaign and give viewers a rare insight into the fierce battles fought in around the region.

Peter McIntyre enlisted as a gunner with the 34th Anti-tank Battery, a New Zealand volunteer unit formed in London with the outbreak of the Second World War in 1939. McIntyre was sent to Egypt with his platoon, where he soon started contributing illustrations to the British war magazine Parade. In January 1941, General Freyberg learned of McIntyre’s painting talent and duly appointed him New Zealand’s official war artist, chronicling the activities of 2nd NZEF throughout Europe and North Africa. These images became a frequent presence in magazines such as Illustrated London News and the New Zealand Listener, causing McIntyre’s paintings to quintessentially represent the experiences of New Zealand soldiers in the Second World War. These works documented the campaigns of ANZAC troops in Crete, North Africa, Tripoli and Italy, and are now held at the National Archives in Wellington. McIntyre returned to New Zealand in February 1946 as a respected and established artist, setting up a studio in Dunedin to quickly become a renowned portrait and landscape painter. 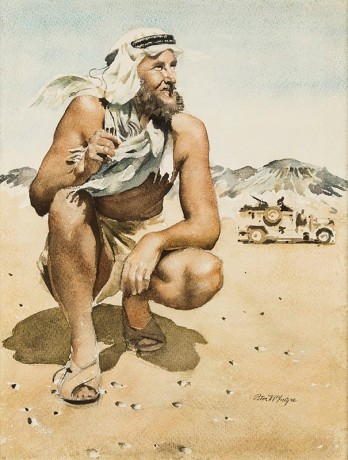 Desmond Williams was born Desmond Ormonde Beale on 3 November 1917. He served with the Long Range Desert Group during World War II and on his return from active service, was adopted by Arnold Beetham Williams (1870 – 1965) who had married Desmond’s widowed mother Emma Beale (1887 – 1959), hence the addition of Williams to his surname. After A.B. William’s death in 1965 Desmond O Williams took over the family’s Puketiti Station near Waipiro Bay on the East Coast.

Beale was educated at Hereworth School, Hastings and Christ College, Christchurch. He enlisted with the Wellington Regiment on the 7th February 1941 (army number 41586). On 7th April 1941 he embarked with the 2nd NZEF for Egypt arriving on 16 May 1941. Having served in the 22nd battalion, on 18th September 1942 he was transferred to ‘A’ squadron of the Long Range Desert Group where he became a member of ‘R’ patrol serving out of Cairo from the LRDG base at Kufra.

On 3 September 1943 he was awarded the African Star, promoted to Corporal and discharged back to his regiment. In 1944 he was transferred to the NZAC engineering department and whilst serving there was awarded the 8th Army Clasp. Having attended the ‘Staghound’ light armoured vehicle course held at the New Zealand Corps school, on 10th January 1944 he returned to ‘A’ squadron LRDG.

On 20 April 1944 he was posted to the 2nd NZEF NZAC Advance Base in Italy and having been injured in June 1944, returned to New Zealand on the Tongariro, disembarking on 21st April 1945. His Army History Sheet records that his name was changed to Williams on 1st August 1945 and that he was discharged on 23rd July 1945.

Desmond Williams returned to Puketiti Station where he assisted his adoptive father, A.B. Williams, in the management of the station and in 1947 took over the management in his own right, although they still continued to work together. Puketiti Station has been associated with the Williams family since William Williams established the first missionary station in Poverty Bay in 1840, having been purchased by his son, James Williams in 1882.

Desmond Williams was a director of the companies that ran the Ihungia and Puketoro Stations and was one of the trustees of the Williams Memorial Trust. He spent most of his life at Waipiro Bay or Puketiti and was deeply involved with community projects and bodies, including being on the Waiapu Hospital Board for 21 years from 1971. He served on the Tairawhiti Area Health Board for two years, was one of the trustees responsible for the health clinics run by the Hikurangi Community Trust, served two years on the Catchment Board, was involved with the local fishing and golf clubs and bought land for an aerodrome at Ruatoria. Desmond was fluent in Maori and was greatly respected amongst the Maori community.

Desmond Williams did not marry. When he died in October 1997 he bequeathed Puketiti station in trust to one of his many godsons, Daniel John Russell, who continues to manage the station through the Puketiti Trust, which he formed in 2005.