Travelling to the US in 1992 to study the works of the Old Masters at the National Gallery of Art in Washington DC, Peter Waddell became enamored with the city the moment he set foot. 10 years later Waddell proudly became a US citizen and to this day calls the capital home.

Waddell has since painted a number of historically significant Washington landmarks such as the U.S. Capitol, the Octagon House and Mount Vernon – the plantation house of George Washington. More recently he completed a large mural titled ‘The Toy Theatre’ on a wall of a block south of the historic district of Dupont Circle. He is currently artist in residence at Tudor Place and is working on several paintings of the Georgetown mansion’s interiors and gardens.

In 2011 Waddell completed his most ambitious project to date; one that called on both his skill as a painter and his research know-how as an art history enthusiast.

The White House Project is a set of 14 paintings commissioned by the White House Historical Association in celebration of their 50th Anniversary with the aim of illustrating moments that took place within or in the grounds of the building from 1796 to 1902. The suite not only serves as a documentation of these events but also as the ultimate laudation of the history and “openness and light” of the city Waddell calls home.

Waddell’s White House canvases clearly communicate the “openness and light” that have him so enraptured. ‘Lafayette Square’ is an excellent exemplar of this with its dusk-pink skies and golden shadows. The aerial perspective and expansive horizon emphasize the vast green spaces and waterways of the city lending the scene a feeling of openness – or indeed airiness.

Waddell’s interior scenes too feel spacious and bright. Take for example the artist’s depiction of the Tiffany designed Blue Room in ‘Something Blue’. High ceilings and a carefully adorned room give the space a sense of loftiness, as do the open doors out onto the balcony and the skies beyond. The iridescent ceiling reflects the soft pale light of the glittering chandelier. The warm natural light from the balcony is caught and held in the blue fabric of the upholstered furniture creating a lovely contrast.

The White House Project series proves that Waddell is truly a master of capturing light – his canvases are bright and luminous, glowing with an interior light.

Perhaps the most important aspect of the project is the fastidious historical detail with which Waddell has embellished each work. The Association’s wish was for each “picture” to be well-researched, encapsulating the period that it sought to represent.

In order to illustrate as true a depiction as possible, Waddell read extensively the history surrounding the events documented in his canvases. He spent hours at the National Archives, studying invoices and inventories, pouring over old maps and architectural blueprints, reading personal letters and private diaries.

It is no surprise then to learn that the project took Waddell six years to complete.

“Each painting took about five or six months,’’ the artist says, “but some of them went on for years because of the research difficulties. There was information I just couldn’t get, and work would have to stop until we found out whatever it was.’’

This meticulous approach allows the viewer a glimpse into history. Take for example ‘The Visit’, which depicts President Lincoln in his office in 1862.  The three books stacked on the stool in the foreground are accurate renderings of the books Lincoln had checked out at the time: Henry Wadsworth Longfellow’s Hiawatha, Frank Forester’s Field Sports and Fish and Fishing.

Whilst Waddell took great care to be historically accurate, many details, such as the colour of the Tiffany glass screen installed in 1883 and destroyed in 1902, are undocumented. In such instances the artist had no choice but to speculate about the appearance of some objects and at times imagine his own.

Peter Waddell’s White House paintings are thus as much his as they are factual evocations of a time since past. His extraordinary skill as a painter and diligence as an antiquarian combine to create works that both inspire and inform. 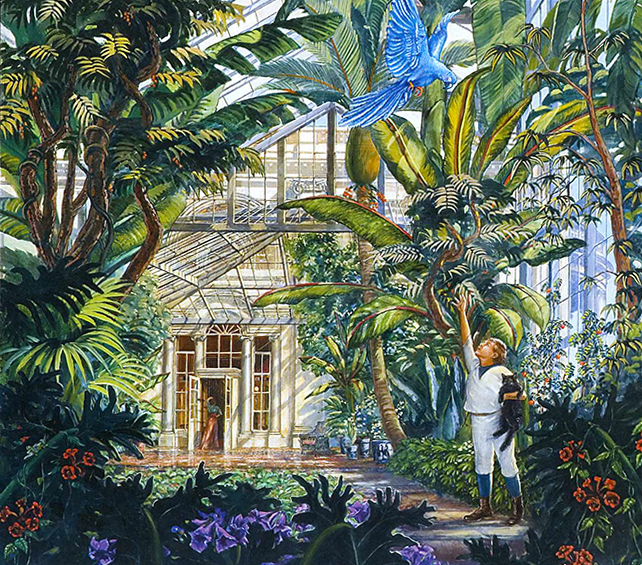