Sydney Lough Thompson was born on 24 January 1877 in Oxford, Canterbury, New Zealand. His father, Charles Abel Thompson, was a man of some enterprise, who had come to New Zealand as a young man and had established a general store in Oxford, before purchasing a sheep farm about four miles from the town.

Sydney Lough attended school locally before beginning work on his father’s farm at the age of 13. He was always very fond of drawing as a child and his earliest memories of art were the annual exhibitions held by the Canterbury Society of Arts where he was introduced to the brooding landscapes of the Otira Gorge by Petrus Van der Velden.

Thompson was so moved by Van der Velden’s work that he resolved to join the Dutch painter’s drawing classes, which were held in the artist’s background studio in Durham Street, Christchurch. Thompson recalls his first reaction on seeing Van der Velden’s works; in the part of Canterbury we lived in, oil paintings were unknown and when I saw this group of Van’s work I was, as the saying goes, knocked right off my feet. Van der Velden was an immensely important formative influence, encouraging Thompson’s ambition to become an artist and developing his approach to painting. In 1895 Thompson registered as a student at the Canterbury College School of Art in Christchurch. He was counted as one of the most promising students at the School of Art, and in 1896 gained three of the six free studentships. In 1899 he won a silver medal for his still-life painting, The Saddle, in the national competition of the British Department of Science and Art, the highest award gained by an art student in New Zealand.

Like so many of his contemporaries, Sydney Thompson went to Europe to further his artistic education. With a large sum of money settled on him by his father, he left New Zealand for London on the S.S. Taluna on August 25 1900. There he enrolled at the Heatherly School of Art.

However, the technical perfection demanded of the school’s pupils only seemed to have the effect of making the young artist reluctant to paint. Thompson left England in 1901 to study in Paris at the Académie Julian and took classes with Gabriel Ferrier and William-Adolphe Bouguereau. The French school had little influence on Thompson’s art instead, he found inspiration in Constable and Turner in England, the French impressionists and Paul Cezanne in France.

Thompson travelled extensively and spent three years in Brittany, where his impressionist style – full of sunlight and colour and of boats and ports – began to evolve. His works of this period are filled with vibrant hues of colour that brilliantly capture the Concarneau light. Thompson would return to Brittany again and again throughout his career. It was here that Thompson defied the conventional techniques of the time and painted en plein air in the markets and harbours of Brittany. In 1904 he exhibited at the Royal Academy of Arts in London, and at the Paris Salon of the Société des artistes Français.

Thompson returned to New Zealand in 1904, and in 1906 was appointed Life Master at the Canterbury College School of Art, where he taught and concentrated on portraiture until 1911. During his tenure as Life Master he formed a sketch club, whose members included Cecil Kelly, Raymond McIntyre, Alfred Walsh, William Menzies Gibb, Leonard Booth, Edwin Bartley, Kennaway Henderson and Charles Bickerton. The group met frequently at his studio in Cambridge Terrace. He also served on the council of the Canterbury Society of Arts from 1905 to 1911, and exhibited regularly at the annual exhibitions of New Zealand art societies. He established a national reputation as a portraitist and a painter of Breton themes and Maori subjects.

Thompson married Maude Ethel Coe at St Mary’s Church, Irwell, Canterbury, on 28 March 1911, and shortly afterwards the couple left for Europe. There Thompson resumed his studies, this time under Lucien Simon in Paris, who it appears also had a seminal influence on the work of Frances Hodgkins. Thompson also attended the Académie Colarossi and took anatomy classes at the École Nationale Supérieure des beaux-arts. He made contact with expatriate New Zealand painters Frances Hodgkins, Owen Merton and Cora Wilding, and renewed his friendship with William Leech, as well as meeting members of the expatriate circle of the Irish post-impressionist Roderic O’Conor. During this period Thompson’s technique became broader and more vigorous and he adopted a more daring use of colour.

After six months in Paris, during which time he became aware of the varied stylistic currents of post-impressionism, Thompson left for Concarneau to further develop his new artistic direction. Rejecting studio practice he painted out of doors at the port, concentrating on capturing colour and movement, and developing his technique by working systematically on increasingly large formats. The First World War disrupted his painting career, but the family remained in France. Three children – a son and two daughters – were born at Concarneau. Thompson’s achievements in France included a successful exhibition in 1920 at the Galeries Georges Petit, Paris, and a ‘mention honorable’ at the Paris Salon in 1922.

The Thompson family returned to New Zealand in 1923, where a series of exhibitions established Thompson’s position as New Zealand’s most celebrated contemporary artist. His painting was popular with private collectors, and was acquired by art societies in Wellington and Christchurch, the Auckland Art Gallery and the Dunedin Public Art Gallery.

Thompson returned to Europe in 1925, but economic and political uncertainty in the region forced the family to move back to New Zealand in 1933. After returning to New Zealand, Thompson served as vice president of the New Zealand Society of Artists (1934), president of the Canterbury Society of Arts (1935–37), a member of the Committee of Management of the National Art Gallery, Wellington, and a member of the Christchurch City Council’s Art Gallery Committee. He lectured and exhibited widely, and was awarded an OBE in 1937.

Thompson became one of the most celebrated artists of the time in New Zealand. He was also one of the first New Zealand-born painters to develop a professional career, but unlike Frances Hodgkins and Raymond McIntyre he did not cut his ties with New Zealand or attempt to define himself within the context of modern British art. From 1948 until his death at Concarneau on 8 June 1973, Thompson often travelled between France and New Zealand, working as a professional artist whose paintings had great public appeal. Sydney Thompson never lost his delight in painting. His last work was completed shortly before his 90th birthday. 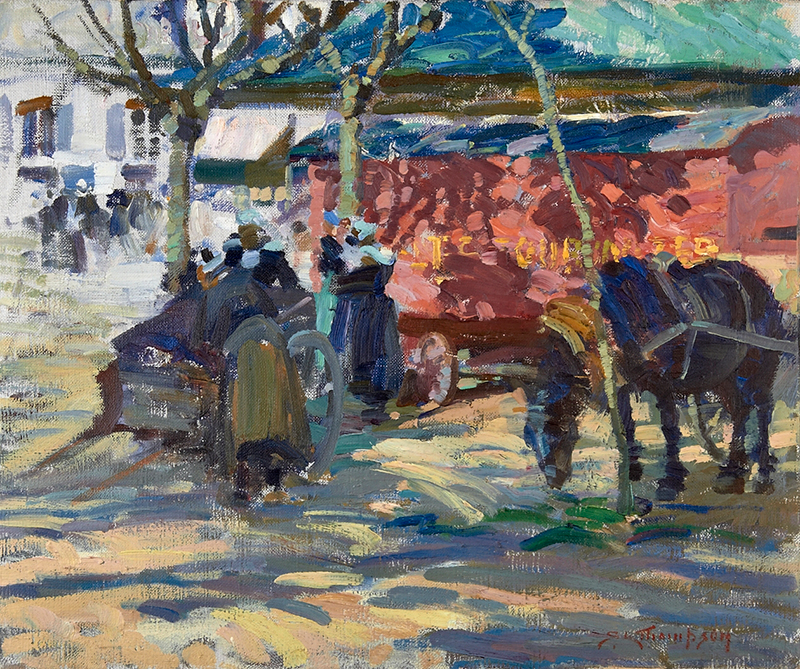